Back to the top with a double title 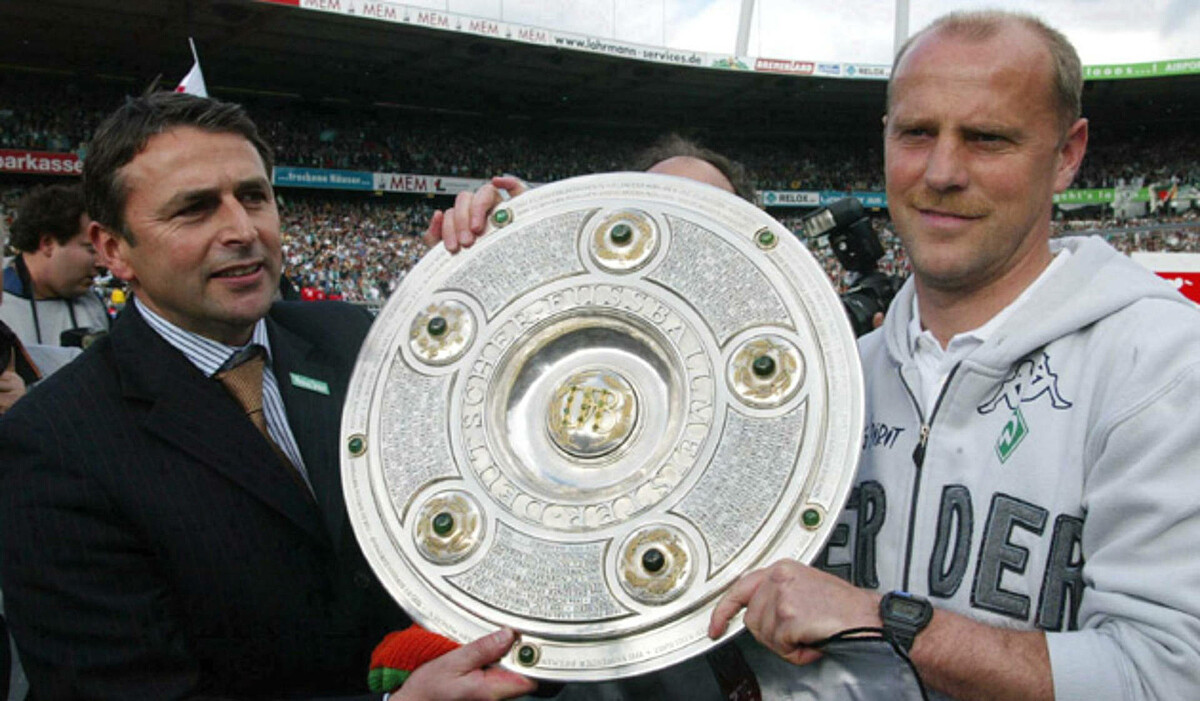 After successfully staying in the Bundesliga under head coach Thomas Schaaf in 1998-99, Werder Bremen began moving back into the international ranks. The Green-Whites used an offensive-minded playing style and displayed their enormous potential. Still, Werder were unable to qualify for a European competition until 2004. Werder profited financially from the selling-off of young, talented players such as Claudio Pizarro and Torsten Frings while Marco Bode and Andreas Herzog both ended their careers at the start of the new millennium as the final players from the successful Rehhagel era.

The new Werder team was made up of top players such as French midfield maestro Johan Micoud, centre backs Valerian Ismael, Frank Baumann and Mladen Krstajic and Andreas Reinke in goal. Up front, the attacking duo of Ivan Klasnic and Ailton provided a steady supply of goals. And 2003-04 would be their season. It did not start out promising as Werder were bounced from the UI Cup in the first round against Austrian side Superfund Pasching. But the remainder of the season would become unforgettable.

Before the campaign, there was a major structural change in the club with Werder Bremen on 1 July 2003 splitting their business operations with professional football and the performance centre from the rest of the top teams from handball, chess and table tennis into the Werder Bremen GmbH & Co. KG aA. The registration of the break off was recorded in the commercial register on 5 December 2003. The purpose of the enterprise was the continuation, expansion and further development of the previous business operations of Sport-Verein "Werder" von 1899 e.V. That left the Sport-Verein "Werder" von 1899 e.V as well as the commercial enterprise Werder Bremen GmbH und Co. KG aA.

The successful structural changes were followed with a Werder double. Werder were among the top teams from the start of the season and climbed to the top of the table on the 16th game day, without giving it up the rest of the season. And they secured ahead of time the title with a spectacular 3-1 victory over record champions and title contenders Bayern Munich. A short time later Schaaf's team knocked off Alemannia Aachen 3-2 to collect the German Cup, finishing off Werder Bremen's first ever double. Two titles in one season had only previously been done by Bayern Munich and 1. FC Köln.