Magic moments in the German Cup and Champions League 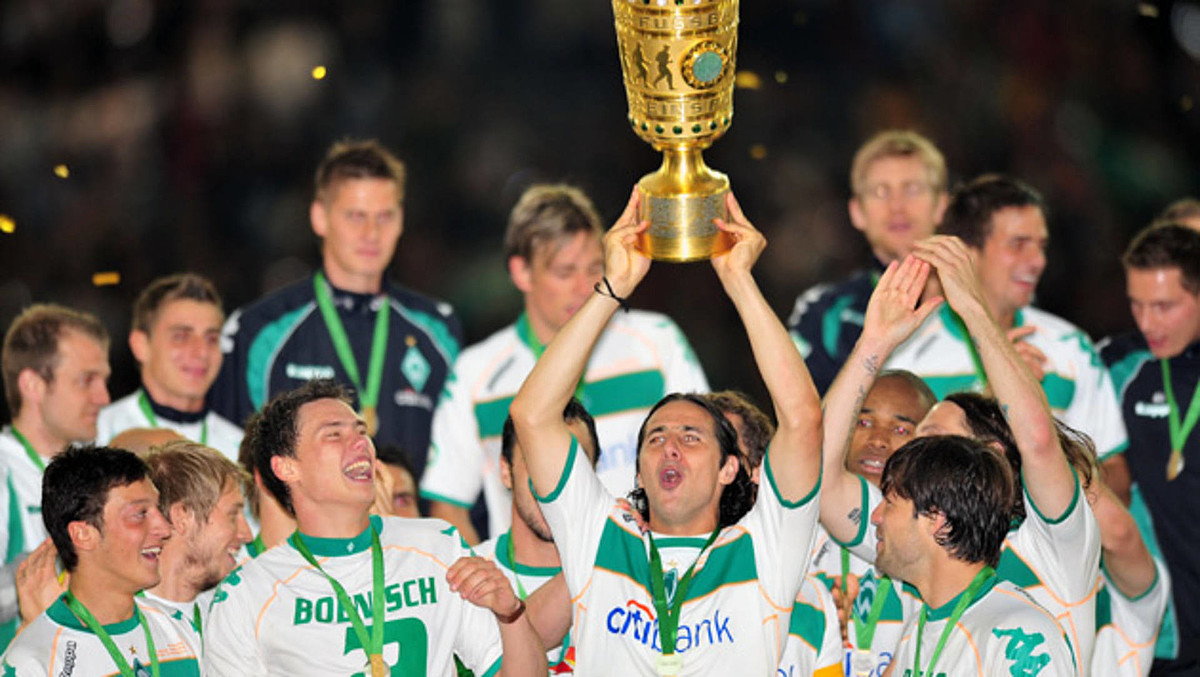 After their league crown in 1993, Werder Bremen took part in the following season for the first time in the Champions League, the successor to the former European Cup of Champions. Werder would become a regular in the Champions League after their double in 2004. Among the magic moments came wins over Chelsea, Barcelona and Inter Milan, not to overlook a German Cup title. But let's go through them one after the next.

In the summer of 2004, top scorer and fan favourite Ailton left Thomas Schaaf's title-winning team to transfer to Schalke. His replacement was former Kaiserslautern forward Miroslav Klose, who more than adequately took over in the Bremen attack. In the season after the double, Werder remained among the leaders in the Bundesliga and finished third. In the Champions League they advanced from the group stage but were eliminated in two bad losses against French champions Olympique Lyon.

Torsten Frings returned to the banks of the Weser for the 2005-06 season with centre back Naldo also strengthening Schaaf's team. In the Champions League, for which Werder qualified by beating FC Basle, Bremen once again reached the Round of 32. Werder were the better team against Juventus Turin but were bounced in the end after a blunder by keeper Tim Wiese. Wiese had established himself as the successor to Andreas Reinke in the following years and even developed into a German international glovesman. In the Bundesliga, Werder finished runners-up in 2006 behind Bayern Munich. But the top goal-getter belonged to Bremen as Miroslav Klose won the scoring crown with 25 goals.

In the summer of 2006, midfielder Johan Micoud left Werder to return to his former club Girondins Bordeaux. To replace him, Werder brought in a Brazilian ball handler from Porto as Diego Ribas da Cunha slipped on the Green-White jersey and swooned fans just like Micoud had done before hand. In the Champions League, Werder drew a difficult group with Chelsea, Barcelona and Levski Sofia. Despite a home win over Chelsea and a draw again Barcelona, Bremen failed to reach the Round of 32. But Werder did advance to the UEFA Cup semi-final where they lost against Espanyol Barcelona. In the Bundesliga, the Green-Whites once again qualified for the Champions League by finishing third.

The 2007-08 season started without Miroslav Klose as the German international transferred to Bayern Munich. In the Bundesliga, where Werder finished runners-up behind Bayern, Bremen came up with one of the top highlights of the season with an 8-1 win over Arminia Bielefeld. Other highlights came in the Champions League where the Green-Whites came up with home victories over Real Madrid and Lazio Roma. But Schaaf's team lost twice against Olympiacos Piraeus and continue their European season in the UEFA Cup, where they were eliminated in the Round of 32 by Glasgow Rangers.

The 2008-09 season ended in 10th place in the Bundesliga. But Bremen went very deep into the cup competitions. After finishing third in the Champions League group stage, Werder stormed to the last UEFA Cup final before it was renamed the Europa League. Before that Werder had eliminated northern German rivals Hamburg in the semi-finals in what were two of four derbies within 19 days between the clubs. Werder also beat Hamburg in the German Cup semi-final and won the Bundesliga showdown as well. In the UEFA Cup final, Werder were narrowly beaten by Shakhtar Donetsk. But Bremen beat Bayer Leverkusen 1-0 in the German Cup final on a goal by Mesut Özil, who did well in the midfield alongside Diego. The victory over Leverkusen gave Bremen their sixth German Cup.

But that was the last title for Diego as the Brazilian transferred before the next season to Italian giants Juventus Turin. In the Bundesliga, Werder celebrated their 111-year anniversary by playing again among the leaders. Bremen used a furious finish to end the season in third place and qualify for the Champions League for the fifth time within six years. In the Europa League, Bremen were eliminated after two fabulous games against FC Valencia.