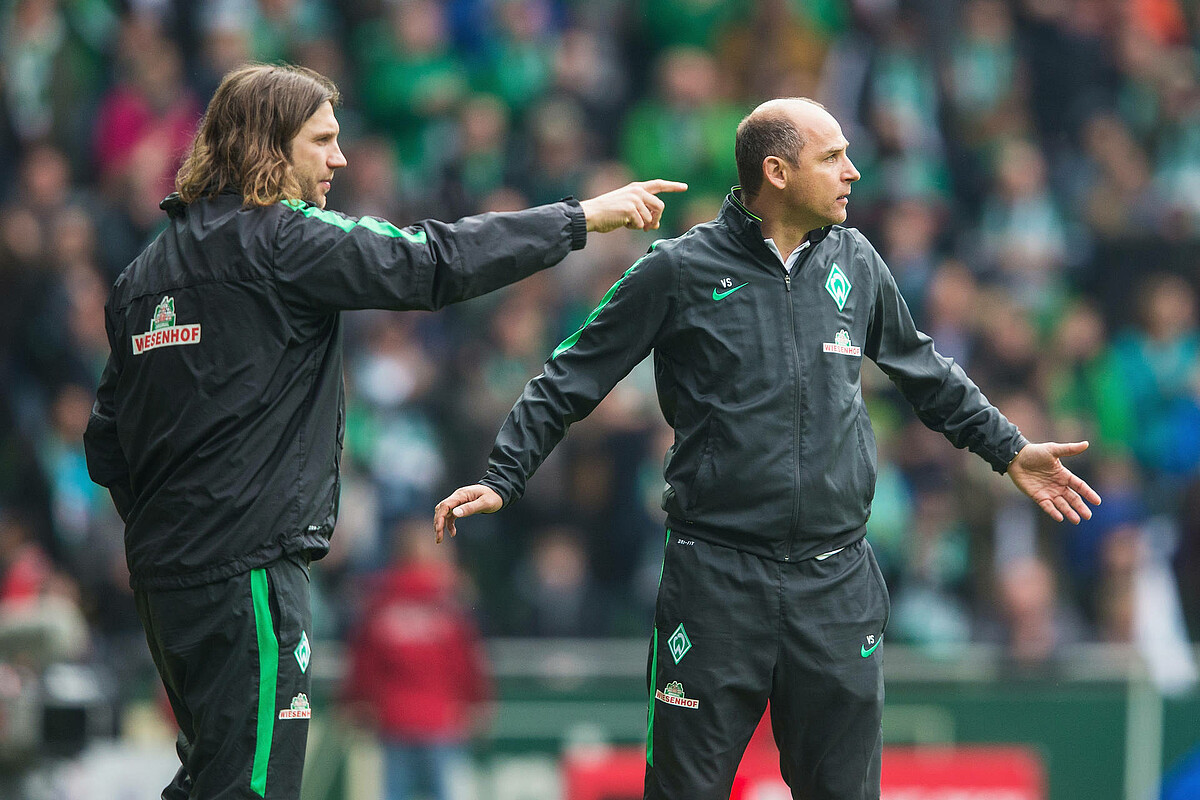 After several years of being a constant presence in the Champions League, both the fans and the club had gotten used to playing on the European stage, as Werder carved out a name for themselves with their success in the DFB-Pokal, the Bundesliga and the UCL. However, 2010 represented a turning point for the club, one that ended with the departures of veteran head coach Thomas Schaaf and long-time chairman of the board Klaus Allofs. Several changes to the personnel within the club would lead to the start of a new era for the Green-Whites over the following five years.

The 2010/11 season saw multiple new challenges emerge, as the Green-Whites had to deal with several personnel changes both on and off the pitch, as well as a lack of sporting success. At the end of 2009, Klaus Allofs had taken over as chairman of the board following Jürgen L. Born’s resignation. A few months later, former Werder player Frank Baumann was named Allofs’ assistant. At the same time, there were several changes underway on the pitch as well. Over the course of the previous seasons, Mesut Özil had developed into a first-team regular and Germany international under the Werder motto of “Stars are made and not bought.” The 2010/11 season saw the midfielder make the move to Real Madrid.

The Green-Whites started the 2010/11 season by qualifying for the Champions League group stage after two thrilling games against Sampdoria. But, that was the end of the road for Werder. After six consecutive years of Champions League football, this would be the last time to date that Werder took part in the competition. In the Bundesliga, Werder finished the season in 13th place and were knocked out in the second round of the DFB-Pokal by record champions Bayern München.

The highlight of the season came thanks to striker Claudio Pizarro, as the Peruvian scored a historic goal against Borussia Mönchengladbach on 23rd October 2010. His goal in the 75th minute sealed a 4-1 win for Werder, and was also his 134th Bundesliga goal. Pizarro’s goal saw him surpass Giovane Elber in the all-time rankings, and secured his spot as the Bundesliga’s top foreign goalscorer. 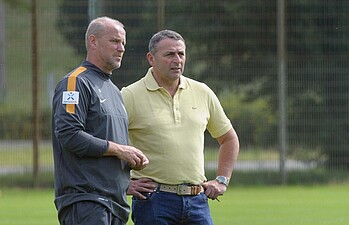 The newly-renovated Weser-Stadion reopened on time for the start of the 2011/12 season. From that point on, Werder were playing their home games in a stadium designed solely for football matches. The start of a new season was also meant to mark a fresh start for Werder, as they looked to turn around a recent lack of success on the pitch. But, the breakthrough failed to appear. Despite improving to ninth place in the league, Werder suffered a shock elimination in the first round of the DFB-Pokal at the hands of 1. FC Heidenheim 1846. Werder were without club legend Torsten Frings, after the former Germany international and Werder captain joined MLS side Toronto FC at the start of the season, where he would go on to end his playing career. Werder fans also had to say their goodbyes to defensive juggernauts Petri Pasanen and Per Mertesacker.

The following season, Werder were once again unable to build on their success from years past. The team ended 2012/13 in 14th place and were once again eliminated in the first round of the DFB-Pokal, this time at the hands of Preußen Münster. However, the season still has a place in the Green-White history books. The duo of Allofs and Schaaf had given Werder a reputation as a top-of-the-table team, one which had qualified for the Champions League six years in a row. The two also oversaw Werder complete the domestic double in 2003/04, as well as the club’s DFB-Pokal triumph of 2009. But, the dynamic duo finally parted ways in November 2012. Allofs left Werder Bremen after 13 years at the club, and joined league rivals VfL Wolfsburg. Klaus Filbry took over as chairman of the board and has since become one of the new faces at SV Werder. The Green-Whites then announced Thomas Eichin as the successor to Allofs on 27th December 2012.

Just six months later, Thomas Schaaf’s long and successful run as head coach also came to an end. Shortly after celebrating his 14-year anniversary as head coach of the Green-Whites, the club and Schaaf agreed to part ways on 15th May 2013. Schaaf’s tenure on the touchline ended with the Green-Whites securing their spot in the Bundesliga for another season. 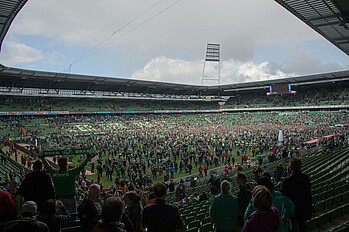 There was no holding back the crowd after a crucial win against Frankfurt in May 2016 (photo: nordphoto).

For the first time in 14 years, Werder started the 2013/14 season with a new head coach in Robin Dutt. The season failed to start off on the right foot, as Werder were knocked out by a third-division side in the first round of the DFB-Pokal for the third year in a row. Things didn’t get any better from that point on, as the Green-Whites suffered their highest-ever defeat at home, falling 7-0 at the hands of FC Bayern. Werder finished the season in 12th place.

The club parted ways with head coach Robin Dutt just nine games into the 2014/15 season. The Green-Whites had failed to win any of their matches to that point, with U23 head coach Viktor Skripnik taking over in the dugout. At his side were two former Werder players: Torsten Frings (assistant coach) and Christian Vander (goalkeeping coach). That season, Skripnik led the team from last place to 10th, largely due to a five-game winning run. Werder were once again knocked out of the DFB-Pokal by a third-division side (Arminia Bielefeld), at least managing to reach the round of 16 this time around.

Werder were once again locked in a relegation battle in 2015/16, finding themselves in the danger zone at the end of the Hinrunde. Werder improved during the second half of the season, but were up against stiff competition. The Green-Whites were still in the relegation zone on the final matchday of the season, and needed a win against 15th-placed Eintracht Frankfurt in order to avoid taking part in the relegation play-offs. The match in the Weser-Stadion remained deadlocked at 0-0 for much of the game. Then, two minutes before the final whistle, Chelsea loanee Papy Djilobodji scored the winning goal for Werder as the crowd went wild. Werder went on a surprising run in the DFB-Pokal that season, defeating teams such as Gladbach and Leverkusen in memorable matches. The six-time cup winners saw their run ended in the semi-finals, after a narrow 2-0 loss to Bayern München.

Following the end of the season, Werder parted ways with sporting director Thomas Eichin with honorary captain Frank Baumann replacing him. After three defeats in the opening three matches of 2016/17, it was time for head coach Viktor Skripnik to pack his bags. He was replaced by Alexander Nouri, along with his assistant coaches Florian Bruns and Markus Feldhoff.

“We need to get the spectators back on our side,” former U23 head coach Alexander Nouri said about his new team, as he appealed to Werder’s long-suffering supporters. And things did get better. In dramatic home victories over Ingolstadt, Wolfsburg and Leverkusen – the last of which saw 19-year-old Ousman Manneh score not only the winner, but the first-ever Bundesliga goal by a Gambian – Werder’s supporters were swept up in the flow of emotion. But, Werder’s form was reliably inconsistent. Four defeats in a row at the start of the year, each by a one-goal margin, catapulted Werder down to the relegation zone. 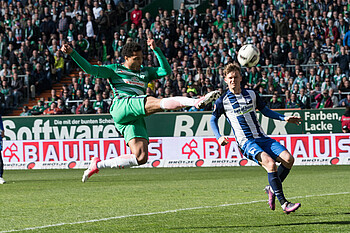 No reasonable observer would have believed that, only a little more than two and a half months later, from out of what seemed like nothing, the team would suddenly become a contender for a European place for the first time in seven years. It all started with a 2-0 win over Mainz, thanks to goals from Serge Gnabry, who has since made a successful debut for Germany’s senior national team, and winter signing Thomas Delaney. The culmination of these efforts resulted in a 2-0 win over direct competitors Hertha Berlin on matchday 31, with goals by Fin Bartels and Max Kruse.

Kruse was involved in an incredible 20 goals in the second half of the season (13 goals – including four in one game against Ingolstadt – and 7 assists) with Bartels at his side. Alexander Nouri’s team remained unbeaten in 11 matches in a row, picking up nine wins while scoring 28 goals and conceding nine.

The team had to deal with a severe injury to captain Clemens Fritz in the game against Darmstadt, where Torsten Frings had since taken on his first post as a head coach. The 36-year-old Fritz would suffer a career-ending ankle ligament injury in his 331st Bundesliga match. Fritz, who was named the eighth honorary captain in Werder’s history shortly after, had to watch from the stands as his side headed into their final three crucial matches of the season. Werder were fighting to end the season in the European places, and Fritz’s teammates served for plenty of thrills while falling just short.

After a 4-3 loss in Köln and a 5-3 loss at home against Hoffenheim, Werder looked as though they would be able to pull off a win away against Borussia Dortmund in order to surpass SC Freiburg to move into 7th place and qualify for Europe the following season. Werder led 3-2 in front of 80,000 fans in Dortmund, before two late penalties saw Dortmund go on to win the match. “What remains today is a sense of disappointment, but we can still be proud of where we finished in the table that season,” said sporting director Frank Baumann. Werder finished the season in 8th and – taking into account just the Rückrunde – were the fourth-best team in the league. 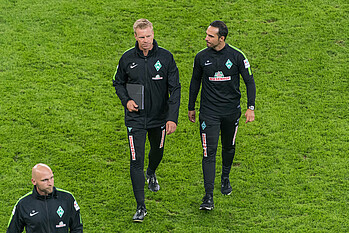 Alexander Nouri and Markus Feldhoff were on the touchline for Werder until October 2017 (photo: nordphoto).

Anyone who had hoped for a change in Werder’s recent run of poor form ahead of the 2017/18 season was sorely disappointed. Despite Werder opening their DFB-Pokal campaign with a 3-0 win over third-division side Würzburger Kickers, the team continued to struggle in the Bundesliga.

Frustrations boiled over for even the most loyal of fans in the Ostkurve on matchday 10. After Augsburg’s Michael Gregoritsch scored to make it 3-0 against a lifeless Werder side, jeers and whistles rang out from the stands from the 40,500 fans in attendance.

“We can only count on having the fans’ support if we give our all for the club, which the players failed to do today. That performance was not worthy of SV Werder,” said Frank Baumann. With no wins, just five points to their name and having scored just three goals all season, Werder found themselves in second-bottom. The lack of sporting success culminated in Alexander Nouri and his assistant coach Markus Feldhoff being relieved of their duties on 30th October.