Look back at the Rehhagel era and the years of transition 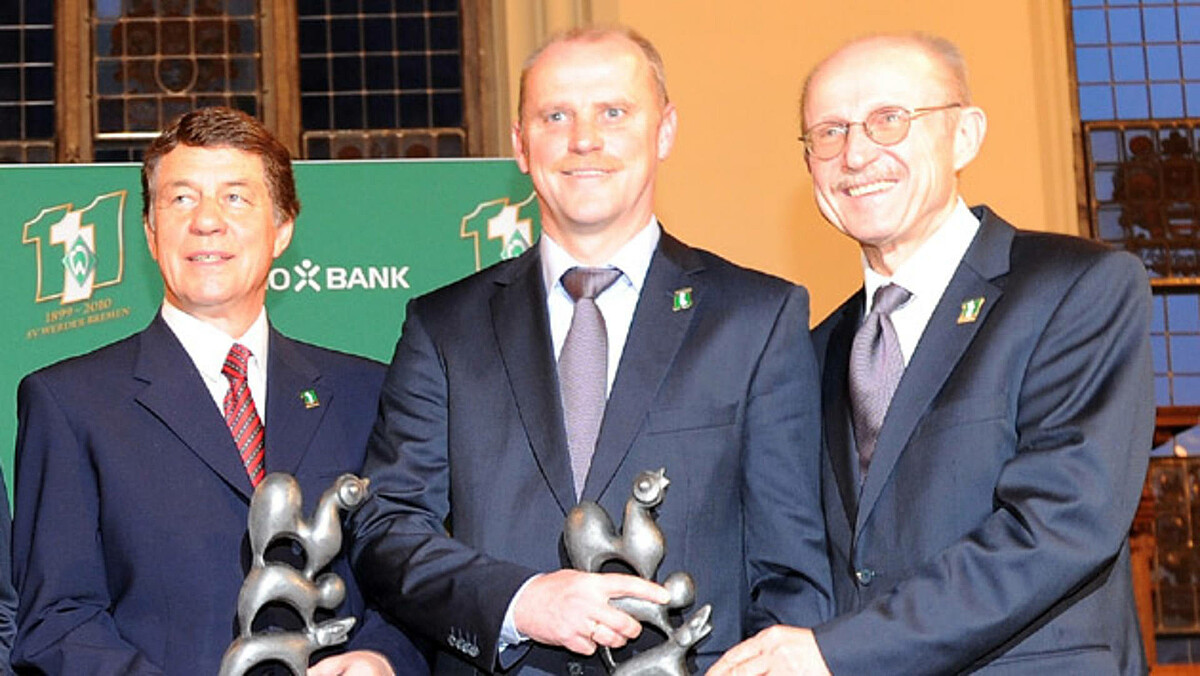 Sometimes he is back in Bremen - in the city in which he coached SV Werder for 14 years. Otto Rehhagel often sits in his favourite cafe and automatically great memories are brought up about the time in which he and manager Willi Lemke helped form Werder into a top level team. The result of the Rehhagel era was plenty of championships, cup successes and sensational encounters for SV Werder Bremen.

The Rehhagel era began in the second division as Werder had been relegated a year earlier despite some big name players. About two-thirds into the 1980-81 season, Rehhagel took over the coaching bench after the previous head coach Kuno Klötzer had to step down due to health concerns. Werder finished atop the second league and earned re-promotion.

Straight away in his first game, Rehhagel proved that he is a coach who he himself says implements "strange ideas". Werder headed to Berlin to face Hertha at Olympic Stadium where 72,000 spectators waited for the teams to enter the stadium. A night earlier, Rehhagel had prophesised to the former Werder treasurer Karl-Heinz Hohnhorst: "Mr. Hohnhorst, if things don't go so well I will throw our small Finn Pasi Rautiainen in at the deep end." And it worked out that way with Rautiainen being subbed in and scoring the winning goal for a 2-1 victory.

Rehhagel and manager Willi Lemke built up a Werder side which would be one of the most successful teams in Germany into the mid-1990s alongside Bayern Munich with the help of Rehhagel's knack for the right decision and his manner of playing style which would be coined "controlled offense". Rehhagel understood how to build world class stars such as Rudi Völler, Karl-Heinz Riedle or Rune Bratseth into the team structure. Rehhagel also figured out ways to handle headstrong characters such as Mario Basler.

Rehhagel and Co. hoisted the German championship plate for the first time in 1988, followed by German Cup wins, a European Cup Winners Cup crown and another league title in 1993. Also not to be forgotten was the first qualification for a German side for the eight-team group stage of the newly formed Champions League (1993-94) and a number of Werder miracles like against RSC Anderlecht (1993) or blowout wins like against world class side SSC Napoli (1989).

Rehhagel himself called the success of the 1980s and 1990s a "sensation" because it was accomplished "with very modest financial means". One year after the second title Rehhagel left the coaching bench after guiding SV Werder Bremen for 14 years. He moved on to coach Bayern Munich starting in 1995-96, taking with him Austrian international playmaker Andreas Herzog.

After the departure of Rehhagel, Werder's successful football times ended for a few years. Instead of being among the leaders, Bremen regularly finished in the middle of the table with coaches like Aad de Mos, Dixie Dörner and Wolfgang Sidka trying unsuccessfully to match Rehhagel's success. Felix Magath arrived but could only keep his team in the middle of the table as well. And things went down quickly in 1998-99 as the club executive committee members Dr. Franz Böhmert, Klaus-Dieter Fischer and Manfred Müller jointly stepped down in light of the poor development in the second half of the season, making possible the later reshuffling of the club. Manager Willi Lemke also laid down his post though the entire Werder leadership took over new spots in the club, in the limited company, the supervisory board, the board of directors or management. And Jürgen L. Born was installed as new president and later chairman of the board of directors. Before the resignations in the upper ranks a coaching change was already agreed upon.

After Werder lost against direct relegation contender Frankfurt, Magath was sacked with Thomas Schaaf taking over after coaching the club's amateurs with Klaus Allofs moving into the manager position. Werder stayed in the Bundesliga and a new era was about to begin.