First meeting with Dresden in 25 years

Werder have already played two of three promoted sides in the league this season, with the third, Dynamo Dresden, their next opponents this coming Sunday (13:30 CEST). Despite three consecutive defeats recently, the hosts can’t be underestimated: “You can’t forget that those games were all close. They started well as a promoted side and have a lot of potential. It will be a tough and intense game for us, plus there will be lots of emotions in Dresden,” said head coach Markus Anfang at the pre-match press conference on Friday.

The squad: Christian Groß underwent a successful knee operation on Thursday and will be out for around six to eight weeks. Leonardo Bittencourt (rehabilitation training) and Ömer Toprak (muscular problems) remain unavailable, as well as Felix Agu (rehabilitation training). Niclas Füllkrug, who missed training this week due to an illness, is an option for Anfang. 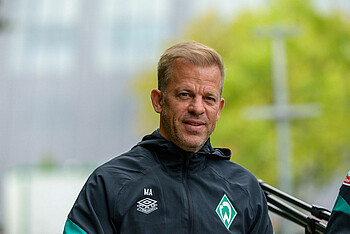 Markus Anfang: "How players are performing is what really matters" (Photo: nordphoto).

The head coach on the game: A lot of the focus going into Sunday has been on Werder defender Lars Lukas Mai. He will return to the club he began his career at, and could also face his brother Sebastian. “It will definitely be a special and emotional game for Lasse. We shouldn’t take that into consideration though, as how players are performing is what really matters. The only thing that counts for Werder is getting the three points,” summed up head coach Markus Anfang. “We will need to stay calm and give 100% in each game, regardless of whether we’re playing a promoted side or an established team in this division.”

The last meetings: This will be the first competitive clash between SV Werder Bremen and Dynamo Dresden since 18th February 1995. Back then, Werder, coached by Otto Rehhagel, beat SGD 1-0 in the Bundesliga, who had Horst Hrubesch in charge. All previous 10 competitive meetings took place between 1991 and 1995. SVW have a clear advantage in the head-to-head standings, recording six wins to Dresden’s three (plus 1 draw).

Another win against a promoted side? 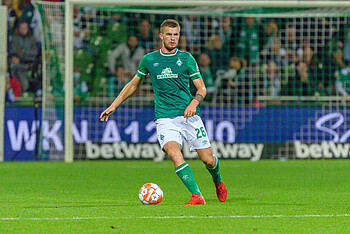 A losing run after a good start: After recording three wins and a draw from their first four games of the season, Dresden are now on a three-game losing streak for the first time since June 2020, a season in which they were relegated from the 2. Bundesliga. The 3-0 defeat at home to Paderborn ended a run of six straight home victories in all competitions for Dresden, a streak which went back to last season.

All good things come in threes? Promoted sides have only won one of their last 11 games against relegated teams from the Bundesliga in the second tier. This season, Werder have beaten the other two promoted sides, Rostock and Ingolstadt, 3-0. Markus Anfang has won four of his five matches against Dynamo Dresden (L1), including an 8-1 thumping in charge of 1. FC Köln on matchday 13 of the 2018/19 2. Bundesliga – his biggest win as coach to date.