Werder Bremen picked up where they left off before the international break with another convincing victory, this time away to FC Ingolstadt 04, as they secured their second consecutive 3-0 wins. SVW made the breakthrough through a Nico Antonitsch own goal (24’) before Mitchell Weiser opened his account for the Green-Whites on debut with a brilliant solo effort (42’). Marvin Ducksch scored his third goal in a Werder shirt just after half-time (49’) to put the game to bed.

Line-up and team news: Two Werder players made their first competitive starts for the away match in Ingolstadt, as new signing Mitchell Weiser and Abdenego Nankishi were named in the starting line-up for the first time in the 2021/22 season. Weiser replaced the injured Agu (calf) and Nankishi came in for Eren Dinkci (muscular issue) on the wing. Markus Anfang also decided to stick with Michael Zetterer in goal and Jiri Pavlenka was named on the bench.

Own goal to open the scoring 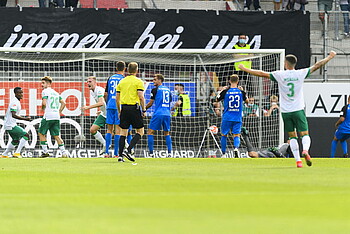 4’: Chaotic situation as Dennis Eckert wins back possession and drives towards the Werder box, and he attempts to create space for a shot by flicking the ball with the back of his heel, but the Werder defence is there to block the Ingolstadt striker’s eventual attempt.

13’: Rapp passes to Ducksch in the Ingolstadt penalty box, but the forward cannot control the ball. Shortly afterwards Romano Schmid attempts to cross the ball for Ducksch, but it doesn’t quite reach him. Marvin Ducksch is knocking on the door!

24’: Goal for Werder! A Nico Antonitsch own goal makes it 1-0! Niklas Schmidt has time and space to put a cross in from the left flank. Nicolai Rapp is lurking around in the area but it actually comes off Antonitsch’s head and he diverts the ball towards his own goal in a crazy passage of play!

27’: Substitution for SV Werder Bremen as Ömer Toprak goes off injured for Lars Lukas Mai with a calf problem. The Werder support chant Toprak’s name as he leaves the field. Get well soon, skipper!

42’: Goal! Mitchell Weiser scores for 2-0! A great solo goal from Weiser, and what a way to make an impression on debut! Schmid plays it to Weiser in the centre of the pitch and the full-back goes on a tremendous run through the Ingolstadt defence. He beats one defender with a step-over and tucks it away to double Werder’s lead. 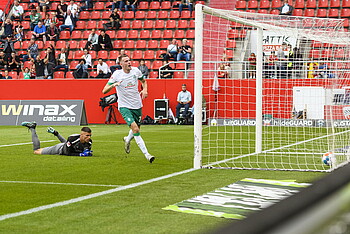 48’: Goal! Marvin Ducksch adds a third! Romano Schmid breaks down the wing and plays it in to Niklas Schmidt, who receives the pass well and has a shot on goal which is initially saved by Buntic before Ducksch pops up to head home the rebound.

53’: Nankishi has the chance to make it 4-0, as he drives into the Ingolstadt box from the left wing and has an open shot on goal, but Buntic saves his effort.

59’: So close! Niklas Schmidt has a go from range and Buntic must carefully watch the movement of the ball. He parries the shot onto the crossbar but it almost went in!

73’: Huge chance for Ducksch! Romano Schmid advances down the wing once again and puts a low cross in towards Marvin Ducksch, but his shot sails just past the left post.

77’: Ducksch is one-on-one with Buntic! Rapp’s pass to Ducksch cuts open the Ingolstadt defence and leaves Ducksch free to drive towards the Ingolstadt goal and shoot, but his effort goes just wide.

89’: Nicolai Rapp has another shot, this time inside the Ingolstadt penalty box, but Buntic gets down to save Rapp’s effort, and nothing comes from the resulting corner.

Summary: The referee Tobias Welz blows for full time without any added time played. Werder took a somewhat fortunate lead through Nico Antonitsch’s own goal, and then Mitchell Weiser’s solo goal extended their advantage. The Green-Whites continued to play well in the second half and dominated the period. Marvin Ducksch’s goal made it 3-0 and secured a convincing away victory.

14.09.2021 / First Team
Your web browser ist outdated.
The web browser you are using is no longer supported.
Please download one of these free and up to date browsers.
Why should I use an up to date web browser?