Match report on the 4-0 victory over Erzgebirge Aue

It couldn’t have been a better start for new Werder head coach Ole Werner. Romano Schmid opened the scoring in the 7th minute with a brilliant curling effort before a Milos Veljkovic scorpion kick made it 2-0 after 19 minutes. The striking partnership of Marvin Ducksch (53’) and Niclas Füllkrug (57’) then chipped in with two second-half goals to round off a successful final fixture at the wohninvest WESERSTADION in 2021.

Line-up and team news: For his first match in charge of SV Werder Bremen, Ole Werner made two changes to the team that started in Kiel as Milos Veljkovic, who had completed his recovery from a muscle injury, and Romano Schmid came into the starting XI for Ilia Gruev and Eren Dinkci, who, along with Nicolai Rapp, Fabio Chiarodia and Niklas Schmidt, was unavailable for the game due to a COVID-19 infection. 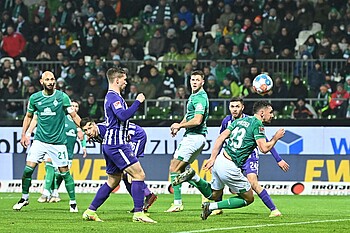 7’: GOAL! Romano Schmid makes it 1-0 to Werder Bremen! Ducksch and Jung see their attempt to work it around Aue’s defensive line stopped and it gets partially cleared to Romano Schmid. The young Austrian is in a good position for a shot just outside the penalty area and has a go with a curling shot that finds the top corner. Brilliant!

19’: GOAL! Milos Veljkovic scores Werder’s second! What a way to announce your return from injury! Aue clear Marvin Ducksch’s initial corner but only to Romano Schmid once again, who heads it back into traffic. Füllkrug then wins the flick-on and finds Milos Veljkovic who then scorpion kicks the ball into the back of the net.

24’: Ducksch finds the side netting! That was close. Bittencourt plays it nicely to Agu, who then fires a cross into the box from the right flank. He finds Marvin Ducksch, but his effort goes into the side netting. Füllkrug tests Aue goalkeeper Männel soon after, but the away side’s keeper is on hand to save the attempt.

32’: Bittencourt hits the post! Bittencourt is looking to join the fun that Romano Schmid kick-started. The Austrian sends an accurate ball to the completely-free Leonardo Bittencourt and he has time to pick his spot against Mämmel, but his shot unfortunately hits the post.

40’: Bittencourt plays Niclas Füllkrug through on the right-hand side who sprints to win the ball. He then picks out the on-running Christian Groß on the edge of the box, who fires a fierce effort towards Aue’s goal, but the shot is blocked and the ball goes out for a corner which amounts to nothing. 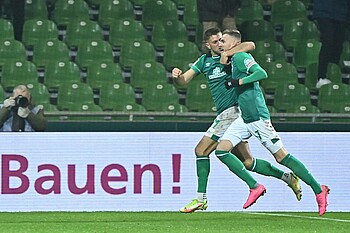 Niclas Füllkrug and Marvin Ducksch settled things in the second half (photo: nordphoto).

50’: Chance for Jung! Ducksch pressures the Aue defender and wins a corner, which the attacker takes himself and it eventually comes to Anthony Jung, who gets his left foot onto the ball and pokes a shot towards goal. The shot is just inches away from going in. First good chance of the second half goes begging!

53’: GOAL! Marvin Ducksch makes it three! Great play by Niclas Füllkrug! The striker jumps to block Messeguem’s clearance and works hard to get to the ball. He then lifts his head up and squares it to Marvin Ducksch, who only has to calmly slot it home to round off some great link-up play! Get in!

57: GOAL! Niclas Füllkrug scores for 4-0 and gets a piece of the action for himself, which is completely deserved! Romano Schmid plays it nicely for Felix Agu who speeds past his opponent and puts a flat cross into the box for Niclas Füllkrug to tap in for 4-0.

62’: Aue score, but it’s offside! John-Patrick Strauß crosses to a free Nazarov and he tucks it away past Pavlenka, but the striker was judged to be offside during the build-up and so the goal is ruled out. We got lucky there!

68’: Another chance for Bittencourt! Niclas Füllkrug plays another pass through the eye of a needle to find Bittencourt, and the midfielder tries to fire it low into the bottom corner, but Martin Männel stretches to tip the effort past the post for a corner. The resulting set piece is not properly dealt with by the keeper initially, but he then manages to collect the ball.

75’: Nazarov hits the bar! Milos Veljkovic plays a sloppy pass which lands at Dimitrij Nazarov’s feet. The Aue striker cannot see an option to play it to, and so has a go from just three yards in front of the halfway line. Pavlenka is a little out of his goal, but gets back in time to tip the ball onto the bar and can be thankful that the post did the rest for him.

Summary: A comfortable win on home turf was the best reaction Werder could show after the 2-1 defeat in Kiel. The Green-Whites didn’t let up after the first goal and put their guests under serious pressure. Schmid and Veljkovic scored spectacular goals before Ducksch and Füllkrug showed their class as a striking partnership and scored two simple goals to add to the scoresheet.