“Nothing is set in stone”

Who will start in goal against Ingolstadt? Anfang on Zetterer and Pavlenka

Who will be between the sticks against Ingolstadt? Head coach Markus Anfang will make his decision on his goalkeepers after the end of training on Friday. Werder’s number 1, Jiri Pavlenka, has now recovered from a back injury and will be available for selection. “We have two great goalkeepers, so we can’t really get this choice wrong,” explained Anfang on the competition between Pavlenka and Zetterer.

Zetterer has started all of Werder’s competitive games this season, keeping clean sheets against Karlsruhe and Rostock. “Zetti has an advantage right now, in that he has played more games this season,” said Anfang. That said, Pavlenka has been the Czech number 1 in the last few years, also showing his quality throughout.

This decision will not be a guarantee for the entire season 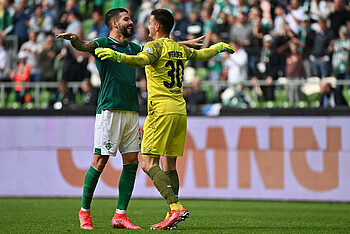 A battle for any starting place is a positive in Anfang’s eyes, and he sees no difference between the fight for the goalkeeping gloves and any outfield position. “It makes me laugh when I say they have to fight for the place – they know that themselves already,” the head coach said in a press conference ahead of the away game against Ingolstadt on Saturday (13:30 CEST). “Both are giving it their all; they’re engaged and can justify their places in the starting XI. We have to weigh up who has done better each week,” explained Anfang.

The Werder coach does not see his decision on Friday as a guarantee for the rest of the season. “We are only looking at the performances. I will never say that one player will play until the end of the season. Nothing is set in stone,” said Anfang, comparing the goalkeeper’s battle to the ten outfielders’. “Whoever delivers on a week-by-week basis will play. That goes for the keepers as well as the outfielders.”