It’s been five days since the end of the 2021/22 season for SV Werder Bremen. 34 matchdays and 3,060 minutes of the 48th-ever Bundesliga 2 season were in store for the Green-Whites – Niclas Füllkrug featured the most for SVW (2,592 minutes), who won 18 matches, drew on nine occasions and suffered seven defeats. There was one main objective come the end of the season – secure promotion back to the top-flight. That objective was achieved on the final matchday of the season – but that wasn’t the only thing that made this season a special one.

WERDER.DE has summarised the most important SVW statistics for the 2021/22 season. 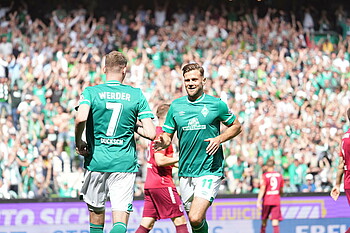 Marvin Ducksch and Niclas Füllkrug have had great chemistry this season. (Photo: WERDER.DE)

Werder, captained by Ömer Toprak, picked up an average of 1.85 points per game, scoring a total of 65 goals and conceding 43. More than half (39) of those 65 goals were scored by Niclas Füllkrug (19) and Marvin Ducksch (20). If you add “Duckschi’s” first goal of the campaign, which he scored for Hannover 96, then our striking duo have scored as many goals this season as Ivan Klasnic and Miroslav Klose did in the 2005/06 season (40).

Ducksch and Füllkrug has 140 and 128 attempts on goal respectively, which were the league-highest, and Ducksch found the woodwork on the most occasions of all Bundesliga 2 players (8). Despite this, Werder’s number 7 still finished third in the BL2 goalscoring charts behind Robert Glatzel (22) and Simon Terodde (30). The remaining 25 Werder goals were scored by 14 other goalscorers, and centre-back Marco Friedl scored the third-most goals for SVW this season, netting on four occasions. 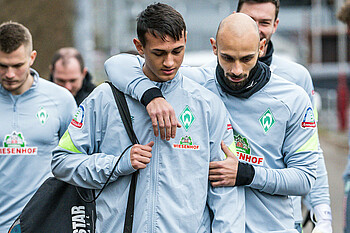 There is a real harmony between young and experienced at Werder. (Photo: nordphoto)

Werder had the second-youngest squad in the league in 2021/22, with an average age of 24.2 years. Despite that, the success of the team was down in large part to the veterans in the team: Aged 33, Christian Groß is the oldest player to have worn the green and white jersey this season, but his 89.77% pass success rate is the best of any Werderaner this campaign. The defender collected an average of 2.07 points per game in his 27 appearances this season – the next-oldest player, Ömer Toprak, is the only man to better this average, picking up a fantastic 2.23 ppg.

This wealth of experience has transferred over to a player half of Toprak and Groß’ age – Fabio Chiarodia. His substitute appearance against Jahn Regensburg in December, when he was just 16 years and 188 days old, made him the youngest player ever to make an appearance for Werder’s first team. Chiarodia has now been included in the matchday squad a total of seven times, an experience shared by 17-year-old goalkeeper Mio Backhaus, who took a place among the substitutes for the match against SV Sandhausen. Werder’s quickest player was also a youngster – 20-year-old Eren Dinkci recorded a top speed of 35.27 km/h this season.

Clean as a whistle: No straight red cards this season

SV Werder are one of just three teams who did not receive a single straight red card in the 2021/22 season. The only time a Werder player was sent off was for two yellow cards – Christian Groß is the unfortunate recipient of this honour following his two bookings in the Nordderby at home to HSV. In total Werder received 70 yellow cards this season.

Marco Friedl was the most-booked player for the Green-Whites this season, being shown the yellow card nine times. Alongside him, Anthony Jung, Leonardo Bittencourt, Romano Schmid and Nicolai Rapp are the only players to have been suspended for accumulating too many bookings this season. Ole Werner’s side ended the season in 7th place in the fair-play table. Interestingly, the player to win the most tackles for SVW this season is a striker: Niclas Füllkrug won the ball 386 times. The front-men led the line in both goals and fairness this season – Werder’s strikers were only booked three times in total and committed less than one foul per game on average.

“My goal is to keep proving myself every day”

“We need to get back into our routines”

“I can’t wait for the season to start!”

24.06.2022 / First Team
Your web browser ist outdated.
The web browser you are using is no longer supported.
Please download one of these free and up to date browsers.
Why should I use an up to date web browser?