90 minutes of the regular season remain. For Werder Bremen, they could be the most important 90 mintues of the season: should Ole Werner’s side pick up at least a point against SSV Jahn Regensburg on Sunday (15:39 CEST kick off), they’ll secure their return to the Bundesliga. Werder’s head coach often remains cool with such an atmosphere ahead of games like this, but the final matchday of the season has also had an impact on him. “I’m really looking forward to the game on Sunday. It’s all about being successful and playing well in our final game of the season. Of course, matchday 34 has a special appeal about it because it’s when things are finally decided. It’s clear that as well as the anticipation, there’s also an element of tension that you feel a little bit more on the last day.”

Team news: Almost the whole squad is available for the end-of-season clash. “With the exception of Manuel Mbom, all the players completed training fully. Ömer is also an option for the matchday squad on Sunday and could start. If a player can complete all of the training drills throughout the week without any problems, he’s a candidate for the starting XI,” said the 34-year-old. “The truth is that it’s matchday 34. We’ll put the players out there on the pitch who give us the biggest chance of winning.”

The head coach on the opposition: Regensburg’s style is based on high pressing and aggression. They try to defend from the front and they’re a side who do a lot well in transition. They also play a direct style with a lot of long balls and get good movements for the second balls. They’re also dangerous at set pieces,” said Werner, who is not expecting any major surprises on the final matchday. “As there’s not much at stake for Regensburg in terms of the table, I’m not expecting them to try anything new.”

Werner: "We want to win the game" 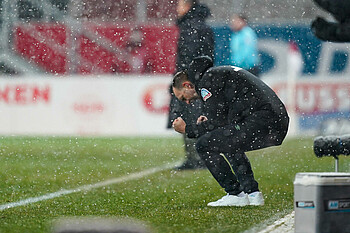 Previous meetings: SV and SSV have only met three times in the past, with two of the games being in the DFB-Pokal. The first league meeting between the two clubs was back in December 2021, when Werder came away with a 3-2 win after trailing 1-0. Leonardo Bittencourt, Marco Friedl and Marvin Ducksch were the goal scorers. The two cup games took place in 2021 and 2004 and SVW came out on top on both occasions.

The current league table: Werder are going into the final game of the season in second place with 60 points. A point against the 13th-placed Jahn Regensburg would be enough to seal promotion back to the Bundesliga. Werder’s head coach, however, has made it clear that his side are going into the game with one thing in mind: “We want to win this game. We’re not going to tactically play for a draw. You can’t play for 90 minutes looking to come away with a 0-0, because football matches are decided by individual moments. I think it makes sense for us to stick to our guns and do the things that have brought us success so far. It wouldn’t make sense to try something new on matchday 34.” If Werder win and league leaders Schalke lose, then SV would be crowned league champions. The coach’s feet, however, remain on the ground. “Of course we will have an eye on what is going on around us, especially going into the final few minutes. But it is important that we stick to the task and play our game,” he said.

Experts in the duels and from long distance: Werder (52.5%) and Regensburg (52.8%) have won the highest percentage of their duels of any teams in the league. Werder have also scored the most goals from long-range with twelve, one ahead of Regensburg who share second place with Nürnberg.

Ducksch’s record breaking season: Marvin Ducksch has seven direct goal contributions against Jahn Regensburg in the second division (4 goals, 3 assists), the most he has collected against any side. Ducksch’s haul of 20 league goals this campaign is also a personal best (19 have been for Werder). No Werder player has scored more goals in a league season since Miroslav Klose in 2005/06, when he scored 25 in the Bundesliga.