“We didn’t fashion many clear-cut chances”

Match reaction to the away defeat against Kiel

Once again, the Green-Whites had several chances which they just didn’t take. The Green-Whites failed to create a lot of good chances in their 2-1 defeat to Holstein Kiel, and interim coach Christian Brand, the players as well as sporting director Frank Baumann agreed with this view.

WERDER.DE summarises the match reaction from the Saturday night match. 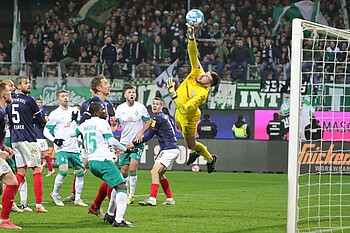 Ömer Toprak: “We are very disappointed to have lost the game. We need to take a good look at ourselves in the mirror. We were nowhere near determined enough, and it’s been a recurring theme of our season, that. We had a lot of opportunities once again today.”

Christian Brand: “We had the chances to take something from this game. In the first half, our play was not tidy enough in the attacking third and we didn’t help ourselves in this regard. I didn’t think we were sharp enough in the second half to get that second goal, and that annoys me.”

Frank Baumann: “Kiel were the more settled side at the start of the game and did lots of good things, but then we had ten good minutes. Overall, our play in the first half lacked precision. Kiel took the lead in spectacular fashion, but luckily we found an equaliser. Then we conceded again almost immediately. We gave it all in attack at the end, but we didn’t fashion many clear-cut chances. All in all, we weren’t good enough for large parts of the game and we weren’t very creative either. It was a frustrating defeat.”

On the current Bundesliga 2 table:

Christian Brand: “Nothing’s settled yet at the top or at the bottom of the table. In this difficult period, it’s about the team and not the league table.”

On the changing head coach situation: 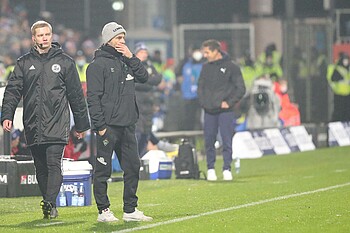 On the changing head coach situation:

Ömer Toprak: “It’s far too easy to say that we’ve all been a bit confused in the last week, but we also went through all that against Schalke. Of course it’s still in our heads, but as players we need to take on some responsibility, and even if we’d had a new coach by now, they wouldn’t have been able to change much in such a short time.”

Christian Brand: “I was excited and focused. We did our jobs and prepared the team for this game. It was a fun experience, but it’s not about me. It was all about getting the lads ready for this game.”

Frank Baumann: “The constant unrest is affecting the players and is of course not helpful, but they took it on board well last week and how the team was set up wasn’t an issue today, they weren’t exactly completely confused.”