Markus Anfang on self-confidence, team news and Schmidt’s start to the season

After the first win of the new season, a 3-2 victory over Fortuna Düsseldorf, head coach Markus Anfang reflected positively on the first three points of the 2. Bundesliga. “The mentality and will to turn the game in our favour even after the equaliser does a lot for the team. A win like that can really provide inspiration,” Anfang told WERDER.DE before warning, “We shouldn’t fall into a sense of security.”

This weekend, the Green-Whites’ DFB-Pokal campaign gets underway. Anfang’s side take on third division side VfL Osnabrück. “We won’t relax at all going into the game. The win has given us more self-confidence, but this game will not be an easy one at all,” said Anfang ahead of the game on Saturday, 07.08.2021, 15:30 CEST. 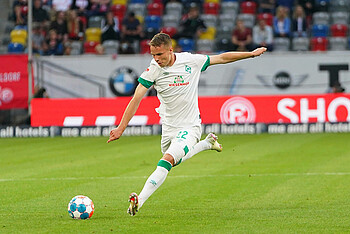 The Werder coach had to deal with another player setback, as Kevin Möhwald, upon his return from coronavirus-related self isolation period, suffered an ankle injury ten minutes after coming on as a 77th-minute substitute. Anfang confirmed that the midfielder has “not suffered any structural injury” but the coach said that the team will wait and see how the swelling develops over the course of the week.

There was, however, good news for Nicolai Rapp, who has been struggling with muscle problems since the training camp in Zillertal, as the head coach gave him the all clear. “Rappo completed large amounts of the past week of training and came through it well. We can’t forget that he’s been out for a long time, though. Therefore, we have to see how he tackles this week.”

One player who was impressive in pre-season has also been catching the eye in the new season. Niklas Schmidt has contributed two assists from set-pieces in the first two games, and his coach is equally as pleased. “All players got the same opportunity to show themselves in pre-season. And it has to be said that Niklas did exactly that, impressively,” said Anfang in an interview with WERDER.DE. “He shouldn’t sit back now, but you can tell that he’s fully committed. He has shown clearly that everyone makes their own fortune.”

A reunion in rival colours

A wise head on young shoulders

Christian Groß set for spell on the sidelines

19.09.2021 / First Team
Your web browser ist outdated.
The web browser you are using is no longer supported.
Please download one of these free and up to date browsers.
Why should I use an up to date web browser?