Following the midweek cup win, all the focus at the Green-Whites is on the upcoming clash against RB Leipzig in the Bundesliga. "It was a full deserved win against Regensburg in the DFB-Pokal, but now the focus is fully on the match against Leipzig," said head coach Florian Kohfeldt ahead of Saturday’s match (15:30 CEST). The last three league matches have ended in defeat, so it’s time to start putting points back on the board.

Squad news: The Green-Whites will be without Ludwig Augustinsson. The Swede suffered a thigh injury in the cup quarter-final against Regensburg, while Niclas Füllkrug is also absent with a broken toe. On a positive note, Ömer Toprak (back) and Milos Veljkovic (thigh) are both back in the squad. Maximilian Eggestein is suspended after collecting five yellow cards. 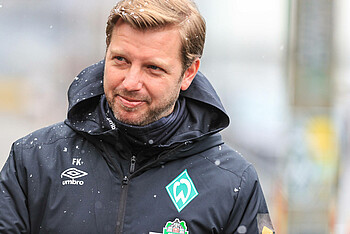 Florian Kohfeldt: "Our base level has improved" (photo: nordphoto).

Kohfeldt’s views on the game: Werder put on a disciplined performance from the get-go in the away fixture against RB Leipzig, but at the same time struggled to make any impact in the opposition half. "We just don’t create enough chances. And when we do create them, we have to be more clinical," was Florian Kohfeldt’s analysis. Matchday 28 sees his side face the league’s second-placed side and the Werder coach was full of praise for his opposite number Julian Nagelsmann. "Leipzig now have a mentality like Bayern. They power on and want to win everything, it doesn’t matter what. You can tell they have a clear plan in their build-up, so dominant and they use their space well.  They play great football under Julian Nagelsmann." Despite reaching the cup semis, the situation in the league remains unchanged. However: "reaching the semis gave us a positive feeling and we achieved something wonderful. We feel good going into the game."

The last meeting: Romano Schmid made his Werder debut in the reverse fixture. Leipzig were the dominant side on home turf; Sabitzer converting the opener from the penalty spot (26'), before Dani Olmo doubled the lead before the break (41'). 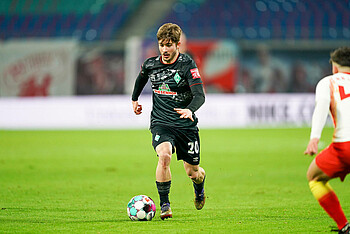 Dominant Leipzig: RB Leipzig have kept a clean sheet in their last four on road, picking up maximum points. Having conceded just eleven times, Leipzig have the best defensive record away from home. Moreover, they are enjoying their best every Bundesliga season with 57 points from 27 games. Only Bayern München (31) have picked up more points away from home than RBL (25).

Firing blanks: Werder have failed to score or pick up any points from each of the last three Bundesliga matches against RB Leipzig. They have also scored more own goals (3) than in any other season in the club’s history. "We’ve done everything we can over the last few weeks to try and put points on the board. To concede two own goals is really unlucky and doesn’t make things any easier to take anything from games," Kohfeldt added.