Match preview ahead of the Bundesliga clash at Bayern Munich

There have been no signs of nerves during training at Osterdeich this week as Werder look ahead to the trip to Bavaria to take on the reigning champions. On the contrary, head coach Florian Kohfeldt and his team are relishing the challenge in Munich. “It’s going to be a great game and we’re all looking forward to it,” said Kohfeldt at the digital pre-match press conference on Friday. The Green-Whites will go into the game having recharged their batteries during the international break, ready for the games in the run up to the Christmas period.

The squad: The free weekend during the international break was put to good use as Maxi Eggestein, Davie Selke, Ludwig Augustinsson and Felix Agu were introduced back into full team training. “Milos Veljkovic and Niclas Füllkrug will not travel to Munich but all of the other players are fit and ready for action,” reported Florian Kohfeldt. There is a chance that Veljkovic and Füllkrug will return to the squad ahead of next Friday’s trip to Wolfsburg.

Competing with the best 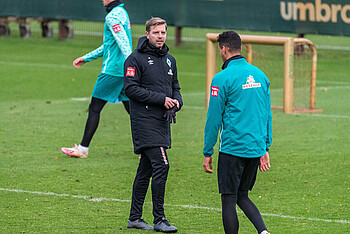 Florian Kohfeldt has a number of options for the trip to Bavaria (photo: nordphoto).

The head coach on the game: Florian Kohfeldt is well aware of Werder’s poor run of form against Bayern over the last few years and the quality in Hansi Flick’s squad: “We don’t need to discuss the fact that that Bayern have higher individual quality in their team,” said the Werder head coach. “We’ve played several matches that have been close over the past few years,” he emphasised, “but unfortunately we’ve not been able to keep our focus for the whole match to get something from the games.” Therefore this time in Munich, Kohfeldt has a different aim for his team: “Shut out all the talk around this game! We should be looking forward to competing against the best team in Europe. We’ve only got a shot if they let up a bit and we play with courage and make the most of our chances.” Kohfeldt also emphasised that his team shouldn’t sit back and park the bus. “We have to dare to go out there and play football, not just try damage limitation and clear it every time we have possession,” he continued. In addition to this, the 38-year-old is expecting his team to show even more passion than usual: “These are the games that have an extra bit of buzz around them, and I hope everyone feels the same way as I do. Games like these are why we all love football.”

The most recent meeting: “We were under a lot of pressure three games before the end of last season, but we gave a very good account of ourselves and played well,” recalled Florian Kohfeldt of the last time the two sides met on 16th June earlier this year. SV Werder took the game to the guests for the full 90 minutes and almost equalised through a Yuya Osako header at the death, but Manuel Neuer was on hand to prevent Werder coming away with a point. Robert Lewandowski’s 43rd minute goal sealed FCB’s victory and the Bundesliga title for the Bavarians. 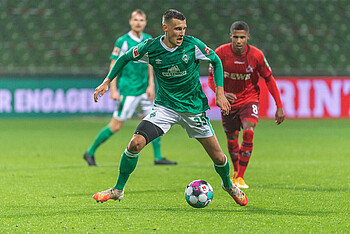 Maxi Eggestein will return to the squad this weekend (photo: nordphoto).

Breaking the streak: In total, 108 matches have been played between SV Werder and FC Bayern in the Bundesliga, with FCB winning 57 of these and the Green-Whites 26, with 25 draws between the sides. Werder last took three points in 2008 with a 5-2 win in Munich, and the champions have a long winning streak in this fixture. FCB have won 22 consecutive games, a feat that no other team has achieved in German professional football since the Bundesliga was founded in 1963. Werder will be hoping to put an end to this run on Saturday.

Picking up points: SV Werder are unbeaten in the last six league games with two wins and six draws. Another 1-1 draw on Saturday would mean the same result in five games on the bounce, a feat last recorded by Bayer Leverkusen in the 1980/81 season, who did this with the same scoreline. Bayern have demonstrated their dominance by winning 33 of their last 34 games in all competitions, with Hansi Flick’s team losing 4-1 to TSG Hoffenheim on the second matchday of this season. FCB have since recovered from this with 10 victories in a row and now sit atop the Bundesliga table again.