Views on the draw in Munich

Speaking before the game, head coach Florian Kohfeldt stated that he did not want his team to draw the fifth game in a row and set a Bundesliga record. However, after a great game in the Allianz Arena, Kohfeldt had changed his mind and was glad to have won a point against the champions of Europe. His players echoed this sentiment, but also spoke about how they would have liked to have taken more from the game.

Florian Kohfeldt: "We defended with a lot of discipline and didn't let ourselves be drawn out of position. We did well to limit their chances and played with a lot of courage in possession, so I'm obviously more than satisfied with the point."

Frank Baumann: "We played some good football out there and had a number of dangerous chances in both halves. I’ve got nothing but praise for the performance of the team. We defended very well, closed down quickly, and didn't let Bayern play the way they wanted to. When we had the ball, we weren’t afraid to play and gave a good account of ourselves. We lost the ball to easily a couple of times in attack, but that’s how you have to play against a team like Bayern.”

Maximilian Eggestein: "You always need a lot of intensity and self-belief to play well against Bayern. Both teams had a lot of chances in the second half. When you look at ours though, maybe we should have scored another to win the game.”

Ömer Toprak: “Obviously Bayern had a lot of possession and switched play well, but when you look at all the clear-cut chances, we really could’ve come away with two more points. We supported and pushed each other – it was really loud on the pitch. We’re happy with the point but would obviously rather have three.”

Marco Friedl: “We wanted to be compact, and we were from the first minute to the last. Bayern had more possession, but they didn’t really have many chances over the 90 minutes. We’re pleased on the whole, but we had enough chances to win the game today. We can live with a draw, but there was more in the game for us.”

Ludwig Augustinsson: “We believed we could get something here before the game. Every player gave 100% for the full 90 minutes. Bayern had a couple of chances, but we also had good opportunities to make it 2-1. In the end though, a point here is a good result. We were really solid – everyone worked really hard.” 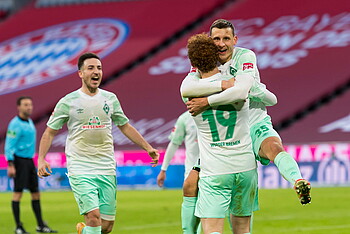 Frank Baumann: “It’s a good point today, we’re happy to come away with it. But the five draws in a row isn’t a record that you’re incredibly proud of. We knew, though, that we’ll have to fight for every point – the team showed a strong mentality, great character and they were really dedicated. We’ve got to keep that up.”

Maximilian Eggestein: “When you play against Bayern, you know that there will be times where you need a bit of luck. We had that today defensively, but we were missing it a little going forward. It’s a bit of a shame, but we’re happy with the point.”

Marco Friedl: “We’d have taken 1-1 before the game, but looking back on how it went I have mixed feelings. We defended well and were dangerous going forward – we could even have won in the end.”

Ludwig Augustinsson: “There have been too many draws and we need to change that soon – hopefully starting Friday.”