Views on the defeat to FC Augsburg

SV Werder Bremen missed out on picking up important points in the battle for Bundesliga survival on Saturday afternoon as they were defeated 2-0 by FC Augsburg. The result saw Florian Kohfeldt’s team slip to 16th in the table and they now sit in the relegation play-off place. “We had the man advantage and created a lot more chances, but we still lost,” said Leonardo Bittencourt as he looked back on the loss after the final whistle. However, head coach Florian Kohfeldt made it clear that the result does not condemn the Green-Whites to relegation yet: “We weren’t relegated today. We still have one last chance against Borussia Mönchengladbach next week.” 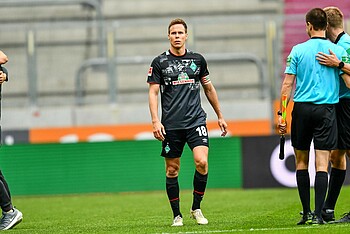 Niklas Moisander’s disappointment after the final whistle was clear to see (nordphoto).

Leonardo Bittencourt: “It’s a very bitter feeling. We had the man advantage and created a lot more chances, but we still lost. We lacked composure and then we went behind to a goal from a set piece. That cannot be allowed to happen. We didn't take advantage of our opportunities. We gave it everything we had but if you don't score, you won't make it. It's as simple as that.”

Niklas Moisander: “We had an extra man for so much of the game and had so many chances to score. We shouldn't have gone down to 10 men; that cannot be allowed to happen. We gave it everything we had but we still went behind to a goal from a set piece. It was a great chance to pick up important points today and it really hurts that we didn't capitalise on that.”

Florian Kohfeldt: “We simply have to take the chances that we get. But we didn't do that, were reduced to 10 men as well, and then conceded two sloppy goals. It was simply bad. We gave up a massive advantage that we had. All the players need to assert themselves more in the game. We didn't play beautiful football today but we have to be taking those chances.”

Frank Baumann: “We are all extremely disappointed. We started well but were unable to take advantage of the fact that we had an extra man. We slowed the game down instead of picking up the pace. In the second half comment we gave up man advantage almost immediately and then as has happened so often this season, conceded a goal from a set piece and were unable to respond.”

On the final game of the season in Mönchengladbach: 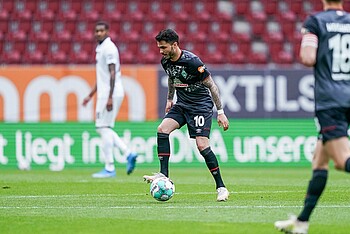 Leonardo Bittencourt is not feeling nervous ahead of the season finale (nordphoto).

Leonardo Bittencourt: “We’re now in the relegation zone and it's up to us to get out. I'm not feeling nervous. We have one more game and we know what is required of us.”

Niklas Moisander: “We can do it just like we did last year. We're still alive and kicking and have another chance next week. We have to go into that game united as a team and win.”

Florian Kohfeldt: “Everyone needs to tighten up; we are in the relegation zone now. All the players are very frustrated but we will get it done next week. We will win.”

Frank Baumann: “We said last season that we have to stand up one more time then we fall down. We have to pick ourselves up and not dwell on the defeat for too long. Even though the game was a huge opportunity for us today, it's all about next week. We need to reach the next level of performance and above all, achieve a more positive result. We have to bring energy onto the pitch and give everything for the club, the team, the city, and the region. We have to try and get out of this situation together.”

12.06.2021 / First Team
Your web browser ist outdated.
The web browser you are using is no longer supported.
Please download one of these free and up to date browsers.
Why should I use an up to date web browser?