Werder advance into the second round

SV Werder have reached the second round of the DFB-Pokal following the 2-0 win over fourth-tier FC Carl Zeiss Jena. Joshua Sargent headed home shortly after the interval, before Tahith Chong doubled Werder’s lead in the 88th minute, having survived an injury scare earlier in the second half.

Line-up and formation: New arrival Patrick Erras made his competitive debut for Werder as he named in the starting XI by Kohfeldt. The Werder coach picked Davie Selke and Joshua Sargent to lead to line up front. Ömer Toprak started in central defence alongside captain Niklas Moisander. 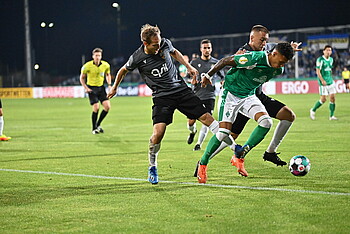 18th min: Leo Bittencourt plays a perfectly-weighted ball to Theo Gebre Selassie, but his first-time effort cannons off the inside of the upright. It’s the biggest chance of the game so far, with Werder on top but Jena not playing badly.

26th min: Gebre Selassie with another effort, this time from the right-hand side, but his shot is caught by FC Jena keeper Lukas Sedlak.

43rd min: Davie Selke takes the ball in his stride and fires in an effort from the right, but Sedlak is able to get a strong hand to it and parry behind. 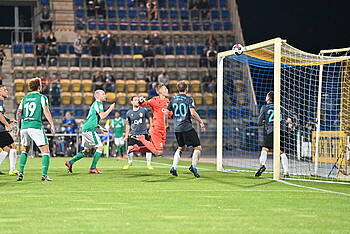 48th min: Two huge opportunities for Werder! For the first, the ball is flicked onto the crossbar after a Werder corner. Seconds later, Joshua Sargent is played in brilliantly by Leo Bittencourt but he misplaces his pass, rather than take the shot himself.

49th min: Werder take the lead! Sargent makes up for his error, as he rises above two Jena defenders to head home from an Augustinsson cross.

58th min: Davy Klaassen finds Leo Bittencourt with a perfectly-weighted pass over the top. He hits a scuffed shot on the turn which bounces past the far post, having beaten the keeper. Werder keep pushing for a second.

72nd min: An injury scare for Tahith Chong as he overstretches his left knee going for the ball and falls to the ground. But after a short break and some treatment, the Dutchman is back on his feet and ready to continue.

84th min: Jiri Pavlenka, who has not been called into action for some time, makes a good save. A Jena free kick finds its way through to Rene Eckardt at the back post, but Pavlenka is equal to his effort and parries the ball to safety.

88th min: Werder double the advantage! Tahith Chong finishes well to wrap up the tie after a well-worked attack by SVW.

90th min: Final whistle! Werder advance to the second round of the cup.

Match summary: Werder looked to be lacking creative ideas in attack against the fourth-tier side, who had already played five matches so far this season. Following the introduction of Davy Klaassen and Tahith Chong at half time, the Green-Whites looked more purposeful and fluid in their link-up play and passing. Ultimately, they reach the second round of the cup as the deserved winners. Werder kick off the Bundesliga campaign next Saturday (15:30 CEST) at home against Hertha BSC.

“I flew under the radar a bit during my youth ca ...

01.03.2021 / First Team
Your web browser ist outdated.
The web browser you are using is no longer supported.
Please download one of these free and up to date browsers.
Why should I use an up to date web browser?