Post-match views on the Hoffenheim match

After earning a draw against TSG 1899 Hoffenheim at home on Sunday evening, Werder Bremen now have eight points after five matches in the Bundesliga - a positive start to the season! In addition to this, Werder are now unbeaten in their last four matches."Eight points after five games is good, but we have to keep going. We're doing well at developing our game whilst also getting points on the board,” said head coach Florian Kohfeldt following the match. 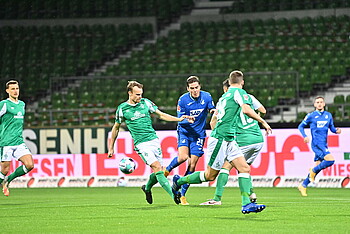 The boys got stuck in against Hoffenheim (photo: nordphoto).

Florian Kohfeldt: "During the first half, we played probably the best we have all season when we had possession. We combined to build out from the back, despite the risk that we might misplay a pass. We had several chances where we could have been quicker and got more bodies in the area. When we were able to do so, Hoffenheim were right there. The goal was wonderfully played out. During the second half, when Kevin Möhwald came on, that's where we were unable to shake them off as well as we had been. We still had one or two good chances during which we established our presence up front, but taken as a whole, I'm satisfied with the point. Especially knowing who we were up against. We did a good job with the basics, and improved in terms of our football, without it being an exceptional game."

Niklas Moisander: “It’s a good result for us and we played very well in the first half. But after we took the lead, we played too passively and let them play around us. But overall I think we can be satisfied.”

Leonardo Bittencourt: “Hoffenheim put us under a lot of pressure and often built up moves from deep, which meant that we did a lot of running. Of course, we would have preferred to come away with all three points but we played well on the whole and it shows we’ve made good progress. We’re satisfied with the point and we intend to go into the Frankfurt game with a lot of positivity.”

Maximilian Eggestein: "I thought that we were on top in the first half, but Hoffenheim were the better team in the second. So the result is a fair reflection of the game.”

Joshua Sargent: "It was another intense game. It's difficult to create chances against Hoffenheim. Of course, we can do better at creating more chances for ourselves, but we keep improving."

Niklas Moisander: “We have to be tighter in defence. We’ve had a bit of bad luck with the deflected shot, but it was well worked by Hoffenheim.”

Leonardo Bittencourt: “Hoffenheim’s goal was annoying because it was a bit of a lucky deflection. They had one or two other chances that I would have been okay with, because they came from good play on their part. But that one is particularly frustrating.”

A great performance rewarded with a point!

17.11.2020 / First Team
Your web browser ist outdated.
The web browser you are using is no longer supported.
Please download one of these free and up to date browsers.
Why should I use an up to date web browser?