Views on the Frankfurt match

Maxi Eggestein and the Werder players were satisfied overall with a point in Hesse (photo: nordphoto).
First Team
Saturday, 31.10.2020 / 18:58

Head coach Florian Kohfeldt’s team fought hard in Frankfurt to earn the third 1-1 draw in a row, a result that the Green-Whites are satisfied with on the whole. Especially pleased was Josh Sargent, who struck his first Bundesliga goal of the season to give Werder the lead in the 51st minute and received a lot of praise from his teammates following the match. 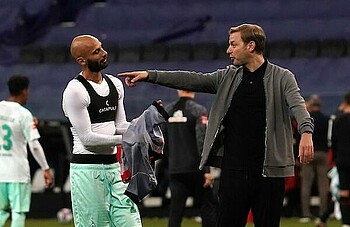 Florian Kohfeldt was satisfied with his team's performance away from home (photo: nordphoto).

Florian Kohfeldt: “We definitely had one or two shaky moments at the back that were dangerous, but we were dangerous at the other end of the pitch throughout the game. We knew before the game of course that Frankfurt like to make use of a flexible structure and that we wouldn’t be able to defend against that one-on-one. It’s always been part of realistically assessing our opponents to look at what will and won’t work. That’s why we allowed Frankfurt to have a bit more of the ball than we usually would today. We wanted to avoid Frankfurt's three- and four-man set-up, so as not to give them the opportunity to draw us out of position and play around that. The boys did this in a very disciplined manner - especially in the first half.  The only thing missing was that cutting edge when we had the ball. Frankfurt were the better team with the ball, but we wanted that and we didn’t panic. There was no question that they were going to score in the second half, but I’d say that we had our fair share of chances too. All in all, the game played out like we imagined it would and I'm satisfied with the team's performance and how they implemented the gameplan."

Christian Groß: “We knew from the outset that it would be a tough challenge on the road - Frankfurt are a good side. So we had to weather the storm on a few occasions and I thought we did that well. We also had good phases which we could have made a more of maybe, but in the end I think we can be satisfied with the point."

Josh Sargent: "It’s always difficult to play here. Frankfurt did a lot of attacking so we had to do a lot of defensive work, but we fought to the final whistle and earned the point. In the first half I lost the ball a couple of times but in the second half it worked out better."

Niklas Moisander: "It was a difficult game. We started off well but got ourselves into bit of trouble later on. I think we can be happy with the point, but we still have a few things to work on in the next few days.”

Maximilian Eggestein: "We knew that Frankfurt was going to be a tough game and I thought we did well. In the second half, Frankfurt had a lot of possession, but especially in the first half we were able to relieve the pressure and had some chances to counterattack.” 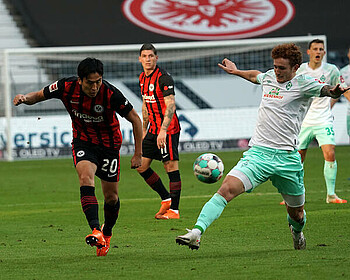 Josh Sargent chipped in with defensive work as well as scoring (photo: nordphoto).

Florian Kohfeldt: "I am incredibly happy for Josh, because he has worked so hard for the team over the past weeks. Josh is a natural finisher and defines his game through goals, but I can see how hard he works for the team. Today he did both and got his reward.”

Maximilian Eggestein: "Josh has already shown what he can do in recent weeks and he got his reward by getting onto the scoresheet today. He’s so important for the way that we play because he does a lot of defensive work for an attacker. He plays a key role in the team.”

Josh Sargent: "Before the game, we discussed how Frankfurt like to press and defend with a high line, so I made the most of the free space in behind in counterattacks. I missed a few chances in the first half, so I was glad that it worked out in the second half.”

On the start to the season:

Florian Kohfeldt: "The way we’ve started the season is good, especially with regards to last year. All of us at Werder Bremen are of the opinion that we want to continue on the current path. At the moment, we need to keep our feet on the ground and stay realistic. The players and the team have to develop and find the best way of playing. Nevertheless, we can’t rest on the fact that we’ve picked up points in these last three games. We want to go into the Cologne game with the ambition to win, which will be a tough task against a team like them as they are not doing badly. It’s a good feeling to be where we are though and to have a consistent set of results and if we could cap this run with a win, that would be excellent.”

Maximilian Eggestein: "Obviously we’re already feeling a lot better than we were in the second half of last season. But it’s important that we don’t settle too much with getting draws. We want to go into every game looking for a win, and that’s what we’ll do at home to Cologne.”

Josh Sargent: “We have a good team with young players and a lot of potential. But we’re just taking each game as it comes at the moment and trying to pick up the most points possible. In the next game I will give everything to do my part in that and get on the score sheet again."

Niklas Moisander: "You can already see the difference compared to last season in the fight that we’ve shown so far. We can be satisfied with the start of the season, but we still have a lot of work to do. In the next game we want to beat Cologne, there’s no doubt about that. Looking back on last season's home game gives us hope, but every Bundesliga game is different, so we have to stay focused."