Despite putting up an incredible fight, Werder Bremen were beaten by a 121st-minute RB Leipzig winner in the DFB-Pokal semi-finals. “We’re devastated. It’s a real shame because we could have got the win,” said a clearly emotional Leonardo Bittencourt after the full-time whistle. Florian Kohfeldt, who will continue as SVW head coach, praised his side despite the overwhelming disappointment: “I’m absolutely gutted, but I’m incredibly proud of my team as well.” 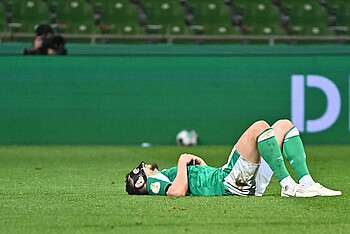 Leonardo Bittencourt: “We’re incredibly disappointed because we were so close to forcing Leipzig to penalties. It’s hard to take. We could easily have won today. We have let our heads drop in recent games, but we didn’t allow that to happen today. We put in a top performance against a very strong opponent. Both goals are very difficult to defend with the quality that Leipzig have.”

Davie Selke: “Huge credit to the team and the coaching staff. Given the situation we’re in having lost seven league games in a row, it’s not easy to put in a performance like that over 120 minutes. The lads were simply incredible today.”

Frank Baumann: “We wanted to see a reaction from the team and we got that today. That was a proper cup fight and we were very much in the tie. The lads put their body on the line, they were much more proactive and fought back after going behind. That was the response and the spirit that we wanted to see.”

Florian Kohfeldt: “That was an incredible performance. It’s no mean feat to battle against a side of their quality and keep out their chances while trying to score a goal at the other end. It’s hard to take that at the end, but it can obviously give us a boost for the league. I’m absolutely gutted, but I’m incredibly proud of my team as well. They gave their all and worked for each other. It was a fantastic reaction and overall performance.”

On Kohfeldt’s position and the league run-in: 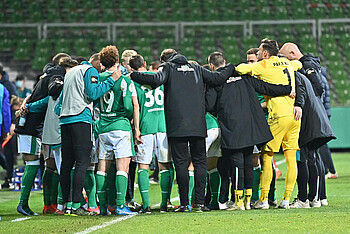 The team delivered a united display in the semi-final (photo: nordphoto).

Leonardo Bittencourt: "As players, it’s our job to give answers out on the pitch. We haven’t don’t that in recent weeks, but I think everyone could see today that there’s life in this team yet. We have to kick on from this performance now. If we don’t work hard, any coach won’t last long. We delivered a response today though and now we have to do the same in coming games, otherwise it won’t end well.”

Davie Selke: “I think Flo deserves credit. It hasn’t been easy for him, but I have huge respect for the way he has dealt with everything. He has guided us all week and I think what you saw out on the pitch today is a clear enough response.”

Frank Baumann: “Of course Flo will carry on as head coach after that performance. Following a run of seven defeats, it was clear that something had to change, and I think we showed a different side to our game today. We have three more finals in the league and if we carry today’s performance into those games, we will survive. Our full focus is now on the final matches and we want to get the job done with this current setup.”

Florian Kohfeldt: “I’m delighted to carry on as head coach because I want to see this through. When a team plays like we saw today, there cannot be an underlying problem with the coach. The lads didn’t play for me, they played for themselves – however, you can’t deliver a performance like that when there are problems between the coach and his team.”

“Not many goals, but important ones!”

A battle of nerves against Augsburg

Hope that Friedl, Toprak and Mbom could feature

13.05.2021 / First Team
Your web browser ist outdated.
The web browser you are using is no longer supported.
Please download one of these free and up to date browsers.
Why should I use an up to date web browser?