Speed up the process

Head coach Florian Kohfeldt is still yet to fully digest Wednesday’s defeat against Eintracht Frankfurt in the quarter final of the DFB Pokal. A big result in the league would certainly help the team to quickly get over what was a frustrating evening for SVW. In order to achieve this against Hertha BSC on Saturday (15:30 CET) the Green Whites will have to take their developments of the past few days to another level. “We created some good chances against Frankfurt. It wasn’t a coincidence. We have to continue like this and give ourselves the best possible chance of winning,” said Florian Kohfeldt ahead of Saturday’s fixture. It can only serve as an advantage that Hertha Berlin tends to be one of Werder’s more favoured opponents.

The squad: The SV Werder injury merry-go-round continues ahead of their crucial trip to the capital. Jiri Pavlenka joins Ömer Toprak on the injury list after straining a muscle during Wednesday’s defeat. Christian Groß and Luca Plogmann will come into the squad in their absence. Philipp Bargfrede will also join the squad and could be in line to make his first appearance of the Rückrunde after recovering from a calf injury. Werder’s front line will also have to be altered, with Davie Selke unable to play against Hertha due to the terms of his loan deal. Claudio Pizarro will take his place in the squad.

Kohfeldt: Going for the win with confidence 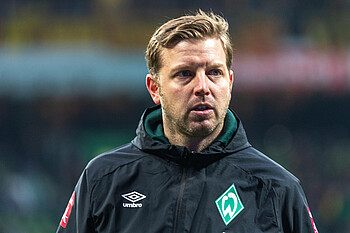 Kohfeldt on the game: Last week’s match postponed, a defeat in the cup and two more injuries: The last few days haven’t exactly gone to plan for the Green Whites. However, that can be no excuse ahead of Saturday’s game. “It’s certainly not a final. No one will be relegated or confirmed as safe on the day. However it’s a hugely important game in the relegation battle,” explains the head coach. 90 long minutes stand between Werder and the three points, and Kohfeldt is expecting a completely different game to the one in Frankfurt. “We’ll probably have more possession. Hertha will try to hit us on the counter and make use of their attacking quality.” In addition to preventing the counter attack, attacking with confidence will play an equally important role. SVW will want to carve their way through their opponent on Saturday and try to end a run of eight Bundesliga matches without a Werder player scoring.

The previous meeting: The match between the two sides earlier on in the season was just one of those games for Werder, who deserved more than just the 1-1 draw. Josh Sargent volleyed his side into an early lead just seven minutes into the game after some nice interplay in the build-up. Florian Kohfeldt’s side then continued to dominate the game, but just couldn’t quite put the ball into the net. The Green Whites were then made to rue their missed chances late on in the affair as Dodi Lukebakio impressively dispatched Hertha’s first real chance of the game, earning his side a 1-1 draw. 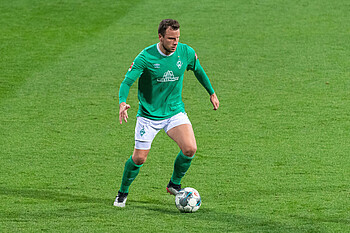 Philipp Bargfrede is on the verge of making his 200th Bundesliga appearance (Photo: nordphoto).

200 appearances for Bargi: Midfielder Philipp Bargfrede not only has the chance to make his first competitive appearances of 2020 after recovering from injury, but could also achieve an impressive milestone. The 31-year-old would reach 200 Bundesliga appearances if he was to feature in Saturday’s game. Bargi made his first appearances for the Green Whites all the way back in 2009 in a 3-2 defeat against Eintracht Frankfurt. Hopefully he will have better fortunes in Berlin, 199 games later.

“Berlin, Berlin, we’re going to win in Berlin”: Hertha have been sick of the sight of Werder in recent years, with a number of disappointing results over the past twelve meetings between the sides. The team from the capital have only ever conceded more goals against Bayern than against SVW (128).

The officials: Referee Guido Winkmann from Kerken will take charge of the game. Christian Bandurski and Arno Blos will run the lines for the 46-year-old. Alexander Sather has been named as the fourth official for the game, while Tobias Welz and Rafael Foltyn will assist via VAR.

A point salvaged at the last second

"We want to control the pace of the game"

EVEN AS A PROMOTED SIDE WE WANT TO WIN EVERY GAM ...

11.08.2022 / First Team
Your web browser ist outdated.
The web browser you are using is no longer supported.
Please download one of these free and up to date browsers.
Why should I use an up to date web browser?