The reaction to the Dortmund game

Two goals in ten minutes turned out to be enough in the end for Dortmund to take all three points home from Bremen. The Green Whites were disappointed with BVB’s opener after conceding from yet another set piece, and with their failure to put the visitors under any real threat. Werder haven’t scored a Bundesliga goal in front of their crowd since the end of November. “We failed to create any goal scoring opportunities,” Davie Selke was self-critical after the game.

Davie Selke: “We played quite well in the first half and started the second half strongly, and then we conceded from a set piece. It’s my fault; I take responsibility for the goal. We failed to create any real goal scoring opportunities.”

Niklas Moisander: “Our performance was better than last week. We were aggressive, but then we conceded from yet another corner. After that it was difficult; Dortmund have a very strong team.” 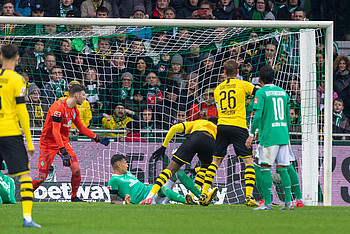 The first goal opened the game up for Dortmund (Photo: nordphoto).

Ömer Toprak: “Up until their goal from a set piece we allowed them very little; we made it very difficult for Dortmund. Then we conceded from a corner and after that it’s very tough against a team like Dortmund, who don’t make many mistakes. The goal opened the door for BVB and played a massive role in their win. We’re in a difficult position at the moment, and we tried to keep the game open for as long as possible. We managed to do that for 50 minutes, but in the end it wasn’t enough.”

Florian Kohfeldt: “The first half was okay. We defended well against a top side. We didn’t even make any huge mistakes for their goals; they just have so much quality. I can’t blame anyone for not giving it their all. The fans were fantastic as well.”

Frank Baumann: “We were quick and aggressive, kept the ball well in midfield and allowed them very little, even if we didn’t create many chances of our own. We also started both halves well. The opening goal is frustrating; at 1-0 it was a very different game.”

The situation in the table: 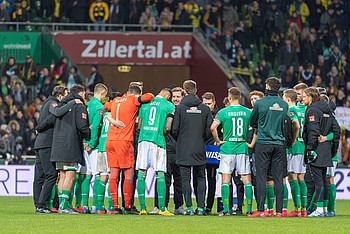 It's important to stick together and pick up points against our direct rivals (Photo: nordphoto).

Davie Selke: “Relegation battles aren’t nice and our current situation is extremely annoying. We need to try to get out of it as quickly as possible. But we don’t need to talk about the coach every week. It lies on us, not him. He’s a really good coach; he sets us up well and motivates us. We need to focus on playing as a team and beating the teams around us in the table. It’s really important to stay positive.”

Niklas Moisander: “It’s a really disappointing situation to be in. We now have an extremely important few weeks ahead of us. Time is running out. Frankfurt have also had lots of ups and downs this season. We need to pick up points against them. No one believes in us, but we will do it!

Ömer Toprak: “We’re in a terrible situation and we need to pick up points, no matter how. We have to start winning against the teams around us in the table. It’s not about creating lots of chances, but taking the ones we have and winning in any way we can.”

Florian Kohfeldt: “We now have eleven games left and we’re three points away from safety. Despite the defeat, what I’ve seen in training this week makes me really proud. We have a long week of training ahead of us now. I can’t influence what happens elsewhere. We have to win.”

Frank Baumann: “We’re now alone in 17th place and the gap has increased even further today. There are also fewer games remaining. Of course the situation has become even more serious. But, as we’ve always said, there are going to be setbacks, and there will be right up until the end of the season. We’re doing a lot, working really hard and by no means will we lie down. We’re not talking about the coach, but rather how we can help him to get us out of this situation.”

When the day comes, we’ll be ready

Individual training on the Osterdeich