Josh Sargent on his goal and the Köln game

It was a special moment for Josh Sargent on a special day for SV Werder, when the American dinked the ball over Timo Horn to finish off the scoring in the 68th minute of the 6-1 win against Köln on the final day of the Bundesliga season. Not only did this goal secure Bremen’s biggest home win since 2009, but it was also the 20-year-old’s first goal since the restart. His previous goal came at the Olympiastadion against Hertha Berlin back on 7th March. Werder’s number 19 was delighted to score his fourth goal of the season. “I have worked hard for this. Finally I’ve scored the goal. It was just like: what’s happening here? It was crazy.”

Because, at this moment in time, Sargent, unlike the rest of his teammates, was aware of the situation elsewhere. When he was substituted on in place of Niclas Füllkrug, he knew that 1. FC Union Berlin were leading 1-0 against relegation rivals Fortuna Düsseldorf, allowing SVW to overtake them in the play-off position. 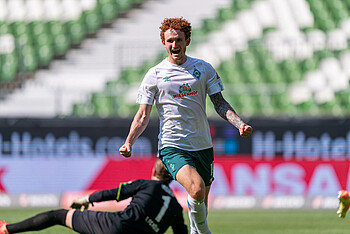 "Keep fighting" was the motto for Josh Sargent and Co. after the "proud moment" (Photo: nordphoto).

The rest of the team were largely unaware of what was happening at the Alten Försterei, Josh Sargent told WERDER.TV: “I spoke to Niklas Moisander after the game and he said he had no idea what the score was in Berlin until they announced in the stadium that it was 3-0 to Union.”

The moment the full-time whistle blew in the wohninvest WESERSTADION far outweighed the feeling of scoring his goal, according to the American. “I had goosebumps. I think everyone felt the same: I can’t believe what just happened. We always said that we will fight until the end. That was a very proud moment for the team,” said a delighted Josh Sargent, who is now focused on the relegation play-off against 1. FC Heidenheim 1846. “We now have two more games left and we will continue fighting.” After all, despite what happened last weekend, nothing’s done yet.

01.07.2020 / First Team
Your web browser ist outdated.
The web browser you are using is no longer supported.
Please download one of these free and up to date browsers.
Why should I use an up to date web browser?