The reaction to the Schalke game

“A deserved, but difficult win.” That’s how head coach Florian Kohfeldt summed up his side’s 1-0 win over FC Schalke 04. Leonardo Bittencourt’s beautiful first half effort was enough to earn his side the win, making that seven points from the last three matches for the Green Whites. Three more huge points in the relegation battle. 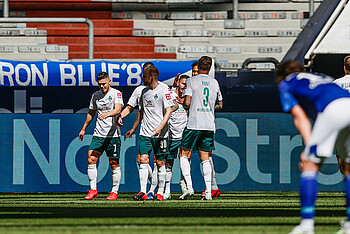 SVW have now won each of their last four games at the VELTINS-Arena (Photo: nordphoto).

Florian Kohfeldt: “A really, really important away win. Our team played really well in the first half. We dominated the possession. Schalke were a lot better in the second half, they pressed high up the pitch and made it difficult for us. They posed a lot of threat. The injuries to Leo and Milot meant we lost a bit of structure. Nevertheless, we fought until the end. Overall it was a well-deserved but difficult, particularly in the second half, away win. Looking at the table it’s clear to see just how important these points are.”

Sebastian Langkamp: “We knew that Schalke would throw everything at us after they came out for the second half. They played a lot of long balls, which was difficult for us to defend. We were quite lucky that we managed to win most of the first and second balls. But they didn’t give us any time to rest. It’s important for us to win these matches. We’ve now picked up seven points from our last three matches. That’s very good in our situation. But despite all of the euphoria, today was a must-win.”

Leonardo Bittencourt: “The fact that Schalke defended with such a deep line didn’t make it easy for us. It was difficult to break them down because there was always someone closely marking you. Then we managed to capitalise when they threw men forwards. We hit them on the counter with three players. It’s now the third game in a row in which we’ve had a completely different team mentality. That’s how we want to continue and you can see that it’s working. It’s yielding the rewards. But we have to keep going, nothing’s done yet.” 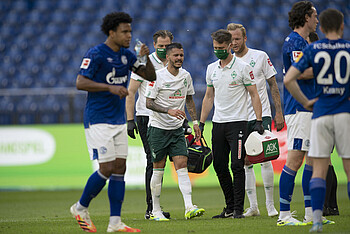 Goal scorer Leonardo Bittencourt had to be substituted at half time due to injury (Photo: nordphoto).

Leonardo Bittencourt: “The three points are extremely important and are really good for us. Tomorrow I’ll probably feel like I’ve been run over. We won; that’s the most important thing. We gave it everything we have and if you come out of it with a painful hip, then that’s just how it is. Of course I hope that I will be able to play again on Monday.”

Leonardo Bittencourt on his goal: "I didn't realise that Nübel was slightly off his line, but generally quick breakaways catch keepers a bit off guard. I take the ball in a half-forward position on the right and drove inside. It often lands behind the goal, but I tried it and was fortunate enough to score."

Sebastian Langkamp on starting: "I'm thankful for the coach's faith in me. I always try to make a case for myself in training. Given that I'm not the youngest player out there, I'm just enjoying each and every Bundesliga game and am happy that I could play today."