“We need to do a lot better”

Phillip Bargfrede had certainly imagined celebrating this landmark in much different circumstances. The veteran made his 200th Bundesliga appearance for SVW against Leverkusen. However, the midfielder unfortunately won’t remember the day with fond memories. But, despite the defeat at the restart of the Bundesliga season, the 31-year-old remains optimistic, he told WERDER.DE.

WERDER.DE: Bargi, how disappointing is it to finally be able to play after such a long time and then have to deal with such a result?

Philipp Bargfrede: “It is disappointing, particularly on the day or two afterwards. We had high expectations, even though we know that we had a difficult task ahead of us in Leverkusen. You have to admit that we made it far too easy for them. Their goals were too easy and when you fail to take your chances, and instead concede the goal to make it 3-1, you’ve lost the game. 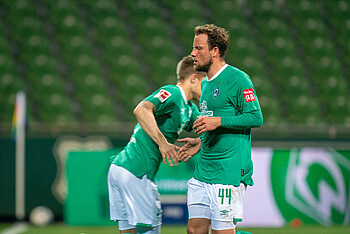 WERDER.DE: You certainly would have imagined your 200th Bundesliga appearance much differently…

Philipp Bargfrede: Of course it was nice and important for me personally that I was back out on the pitch again for the first time this year. Of course I imagined the game would go much differently. I wanted to help the team win.”

Philipp Bargfrede: “It was unusual, that’s for sure. Normally there are people everywhere when you travel from the hotel to the stadium and you can see fans all over the streets. That was missing. You come into the stadium and no one is there. It was an unusual sight, but I didn’t really think about that at the time because I was focused on the game.”

WERDER.DE: Did you manage to block that out during the game, or did you constantly think about it?

Philipp Bargfrede: “We know what it’s all about, that despite everything it was a really important Bundesliga match in a difficult situation. So the tension was still there. However, after I was substituted it was weird not to sit on the bench, but rather to sit in the stands and not have anyone around you.

I’ve been training very well and at the normal level.

WERDER.DE: To what extent can the defeat be put down to your lack of preparation time?

Philipp Bargfrede: Their second goal via a set piece shouldn’t have happened. It’s always difficult to win a match when you allow things like that to happen. It’s very annoying, especially when you consider that we limited a strong Leverkusen side to only a few clear-cut chances. But then we concede such easy goals… we simply weren’t good enough in certain areas.”

Philipp Bargfrede has made the most of the time he's had to train (Photo: nordphoto).

WERDER.DE: How did you feel, physically?

“Good. I was a part of the squad for the game against Hertha before the break and have been able to use the last few weeks effectively. I’ve been training very well and at the normal level. That goes for all of us. We’ve noticed an improvement in our fitness levels.”

WERDER.DE: That’s also shown through the running statistics. And yet you had to come away with a defeat. What do you need to do better against Freiburg?

Philipp Bargfrede: “What we’ve been doing wrong all season: we have to stop conceding so many goals. Once again it was far too easy. We need to improve that considerably.”

WERDER.DE: What makes you optimistic that you will avoid relegation?

Philipp Bargfrede: “The Leverkusen game was a slap in the face for us, a setback. We really wanted to kick the season off again with a win in order to start a good run of form. But the season doesn’t stop here. The advantage at the moment is that all of the matches are taking place in such a short time and you can pick up lots of points in a week. Survival is still within our reach, but we have to do a lot better and learn from our mistakes.”