"We want to control the pace of the game"

Match preview for the first home game against VfB Stuttgart

On Saturday, the first home game of the Bundesliga season takes place. Werder Bremen face VfB Stuttgart at 15:30 CEST on 13.08.22. Head coach Ole Werner is looking forward to a full stadium: “You noticed it last week, and that wasn’t even all Werder fans in the stadium. That support, no matter what form it takes, just like the noise behind us last week, carries us on the pitch. The impact that comes from our home fans sets us apart, even if we enter the game as underdogs. We are counting on this level of support this Saturday,” explained the 34-year-old at Thursday’s press conference.

On the squad: After Werder’s head coach had to do without Romano Schmid for the season opener against Wolfsburg (2-2), due to a positive COVID-19 test, the player returned to team training on Thursday and is available for the Stuttgart match. Niclas Füllkrug, who suffered a muscle contusion in the Wolfsburg game, appears to have made speedy recovery. Coach Werner is optimistic that the striker will be available for Saturday: “He was able to train this week without any limitations, so he will definitely be ready for action on the weekend.” Jiri Pavlenka and Leonardo Bittencourt are also back in the squad after they sat out of Thursday’s training session. The availability of Christian Groß, who missed the final session of the week with an infection, is questionable. Further absentees include the injured Dikeni Salifou and Manuel Mbom, as well as Fabio Chiarodia who remains on international duty with the Italy U19 squad. 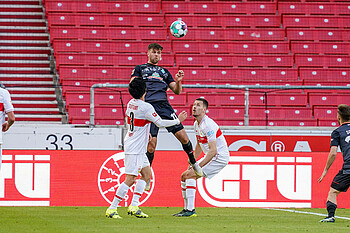 VfB are undefeated in their last five matches against Werder (Photo: nordphoto).

Werner on the opposition: “Stuttgart are a team characterised by their speed, especially up front. They can change positions well and switch the play very quickly. We want to control this pace, defend well and react quickly to any changes. We also, of course, have to be effective in possession, have clear ideas and to control the game over long phases. Our attitude in defence and our compactness will be important, in that, if necessary, we can take the pace out of the game. That is our main task if we want to hold our own against a team as quick as Stuttgart.”

The last game between the two sides: VfB Stuttgart came out on top in both games during the 2020/21 Bundesliga season. After a 1-2 home defeat in the first half of the season and a 0-1 loss away, VfB extended their head-to-head record against Werder. The Schwabens are undefeated in their last five games against the Green-Whites (4 wins, 1 draw).

Old acquaintances: There have been 107 meetings between the two sides. Bremen have scored more against VfB Stuttgart than any other side in the Bundesliga (179 goals).

Werder’s star man: Marvin Ducksch was directly involved in six of Werder’s ten shots on goal during the season opener against Wolfsburg (two shots/four key passes) – no player was involved in more during matchday 1.

Taking on an in-from Gladbach in front of a full ...

“We want a team that plays with passion”

Bittencourt back in the squad

"We are looking forward to an exciting game"

28.09.2022 / First Team
Your web browser ist outdated.
The web browser you are using is no longer supported.
Please download one of these free and up to date browsers.
Why should I use an up to date web browser?