The players on international duty, as well as the players who stayed in Bremen, have had a good opportunity to prove themselves over the recent international break. Ole Werner had the chance to watch his side in action against Hannover in a friendly and he was also delighted that Romano Schmid and Ilia Gruev made their first appearances for their respective national teams. “They have grafted for years to get this opportunity. I am always delighted when our players get the chance to represent their countries and both debutants put in good performances. They will certainly be coming back with the wind in their sails,” explained Ole Werner on Tuesday.

Werder’s head coach has used the only break before the start of the winter World Cup as an opportunity to reflect on his side’s start to the season, and to consider how he will approach the upcoming fixtures. “Our intention was to keep as many of the things from last year as possible. Based on our performances and our current points tally, that has proved to be the right approach,” explained the 34-year-old. “We have been really positive in terms of our playing style in the first seven games and we have deservedly garnered respect for that. This is something that we need to continue doing,” continued the coach.

Keeping our fate in our own hands 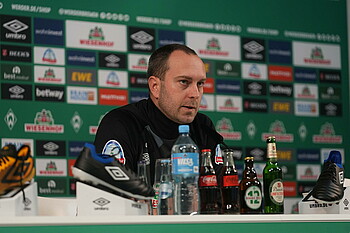 Ole Werner is satisfied with this team's start to the season (photo: W.DE).

The coach, however, is clear on what he believes his side need to work on over the coming weeks: “Just like before, compactness is an issue,” explained Werner, who also named the switching of play and the composition in midfield as things that can be improved. “These are the things that have cropped up over the first seven games and we want to work on them so we can continue to consistently pick up points with our style of play.”

In addition, Werner also asserted that the Green-Whites need to continue to “react well to set-backs”, which they have done multiple times so far this season. “Of course want our fate to be in our own hands as we go into the winter break. I think we’ve done pretty well as a promoted side. Now it’s about continuing the development and if possible, building on the things that we did well in the first seven games, both in terms of performances and in terms of points. Werner also added that he wants his side to still be in the Pokal after the winter break.