Last Thursday, Romano Schmid celebrated his international debut against France and was evidently able to convince head coach Ralf Rangnick, who then brought him off the bench again in the very next game. “He gave me the opportunity to prove myself. I am extremely grateful for that chance,” said Schmid on Wednesday.

Despite the 2-0 defeat to France, Romano Schmid was satisfied with his debut performance; he “brought a momentum swing to the game” and “scarcely lost a challenge.” After numerous appearances for Austria U21s, it was a hugely special moment for the young midfielder. “I was hoping to get some minutes. Playing for your entire nation was something incredibly special.” 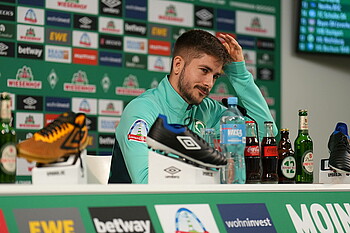 Romano Schmid wants to keep this momentum up (Photo: WERDER.DE).

After his debut on Thursday, Schmid was once again trusted to come on against Croatia. “I think that since I came in strongly against France, he gave me another chance in the second game.” It was another defeat for Austria against the World Cup runner-ups, and in losing were relegated from the top tier of the Nations League. “The bottom line is that we played well against Croatia in the first half and we probably should have taken a two or three goal lead, then we wouldn’t have been relegated,” reflected Schmid.

Keeping the momentum with Werder

After his debut for Austria, Schmid wants to take that momentum and self-confidence with him into his games with Werder. “I’m continuing to try and show my achievements here as well. The boys here know what I can do. So I’m just simple going to keep my foot on the pedal,” explained Schmid. He emphasised that whether he starts more regularly in the near future is out of his hands.

“You’d have to ask the boss. I’ve given everything I’ve got in the minutes that I have played, like against Leverkusen. I feel the manager’s confidence in me and he knows about my quality.”