With courage and aggression

Preview of the away clash with TSG 1899 Hoffenheim

SV Werder will take on TSG Hoffenheim in Sinsheim under the floodlights on Friday evening (kick off: 20:30 CEST). Due to the short turnaround in fixtures, head coach Ole Werner had to to turn the focus to the upcoming duel as quickly as possible despite the three points last time out. “Our task is lways to focus on what lies ahead as quickly as possible and be ready to invest everything to win the next game as well,” said Werner at the pre-game press conference.

Team news: Ole Werner will be able to call upon the services of attacking duo Niclas Füllkrug and Marvin Ducksch on Friday, even after the latter had to receive treatment during Tuesday’s training session. “Marvin has no issues,” confirmed the head coach. There are doubts over the availability of availability of Nicolai Rapp and Eren Dinkci, who have both been battling muscle issues during the week. Manuel Mbom is still out.

The head coach on the opposition: “Looking at the table, Hoffenheim are deservedly towards the top of the standings due to their performances. Their results are not a coincidence and it will be a difficult away game for us. We can expect a very strong team with a lot of good footballers. Like Gladbach, Hoffenheim like to build up from the back, but they have more flexibility in their positional play and have even more speed in some areas of the pitch, so it will be an even more difficult task for us. We need to be just as aggressive and have the same levels of communication and courage and we can make it another close game,” said Werner.

Continue the away run! 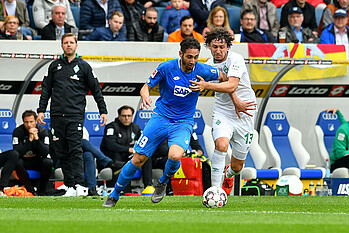 Previous meetings: Friday will be the 27th time that the two teams have met. Of the previous games, SVW have come out on top ten times, while TSG have claimed six wins. However, Werder's most recent win dates back a short while: in May 2019 Florian Kohfeldt guided the Green-Whites to a 1-0 away win, with current Werder player Leonardo Bittencourt on the bench for Hoffenheim. Jiri Pavlenka and Milos Veljkovic started for Bremen, while captain Marco Friedl came off the bench.

Strong on the road: Werder are unbeaten in all four of their Bundesliga games this season. It’s the longest start to the season without an away defeat since the 2009/10 season, when SVW suffered their first away loss in their ninth away match of the season on matchday 17.

Late goals: With Werder having scored eight goals in the final 15 minutes of games this season and Hoffenheim having four goals to their name in the same period, the strongest and third highest-scoring teams in the final quarter of an hour are going head to head.

23.11.2022 / First Team
Your web browser ist outdated.
The web browser you are using is no longer supported.
Please download one of these free and up to date browsers.
Why should I use an up to date web browser?