“There was a lot of fire in the squad’s belly this week,” expressed Ole Werner at the press conference. The Green-Whites will be cheered on by 5,000 fans in Köln – the request for tickers was even higher than that. “It’s time to start again,” Werner emphasised. “Both sides will have huge support behind them, and an evening game is always something special, too. It makes the anticipation that much greater.” 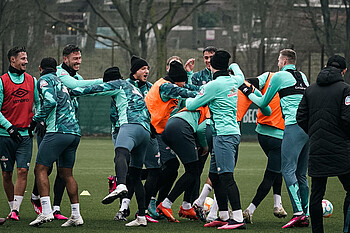 The intensity in training has been raised these last few weeks (Photo: W.DE).

His counterpart at Köln has already revealed his starting line-up during his own press conference. The winter break should have done the Köln squad some good considering that, before the break, they had a very hectic schedule due to their participation in Europe this season. “We’re expecting to see their typical face: intensive and lots of running,” explained Werner. “They put in lots of crosses and are very good at switching the ball at the right time – that’s what distinguishes them. We have to be able to counter their strengths and be wide awake from the first minute.”

At the same time, Werder have their own strengths which should be bought to bear. “Our cohesion” answered Werner when asked about his team’s greatest strength. “We’re a group in which everyone is there for one another. It’s been what has distinguished us so far, and we’ve been able to master difficult situations as a unit.”