"We are looking forward to an exciting game"

Leonardo Bittencourt on his injury and the home game against Gladbach

Before the start of preparations for the home game against Borussia Mönchengladbach on Saturday (01.10.2022, 18.30 CEST), Leonardo Bittencourt returned to SV Werder team training. The midfielder was absent for a number of weeks with a rib injury. Now, he wants to take back a starting berth in Werder’s midfield. “When I come back, I would like to reclaim my place in the side,” explained Werder’s number 10 to the media on Thursday.

First of all, the 28-year-old is pleased to be able to train with the team again, even if his injury is still not fully healed. “I am feeling better day by day.  My rib area is still not back to 100%. There will still be a bit of time until it is completely healed,” said the Werder man. “But up to this point I have been able to take part in two intensive training sessions and I hope that I will be able to keep doing so. I think that it will keep getting better in the next few days. Then we can look and see how it is at the weekend.”

Lay a good foundations for rest of the season 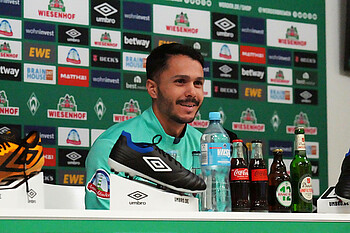 Leonardo Bittencourt is pleased to be back from injury (Photo: W.DE).

Bittencourt has found it hard not to be able to help the team for a number of weeks. “It is extremely fun to be on the pitch with the boys. We are in a place where we are playing really good football, where it is fun, where we keep creating chances and have had the opportunity in every game we play to also win the game.” This meant even during the time of his injury that it was important to him to support the team at the ground for every game. “I have followed all the games live, which has made it even more difficult, when you travel with the team and see the fans in the stadium. But I wanted to be with the team.”

On Saturday, SVW have their next home game against Gladbach. Werder fans have not yet been able to experience a home win at the wohninvest WESERSTADION this season. The Green-Whites want to achieve this “as quickly as possible”, Bittencourt explained. “We are looking forward to an exciting game. Saturday evening, primetime kick-off, sell-out crowd, under the floodlights. But, the main thing is that we go into the game in such a way that we can get the three points.” To consistently pick up points is also an aim for the Leipzig-born player up until the winter break, although he doesn’t want to put a number on how many points the team should have before the break for the World Cup. “I am not a fan of that. We just want to put in good performances week after week, get better and develop further as a side. There is not another break until November. We now want to see it through so that we have laid a good foundations and are able to have a successful season.”

23.11.2022 / First Team
Your web browser ist outdated.
The web browser you are using is no longer supported.
Please download one of these free and up to date browsers.
Why should I use an up to date web browser?