Heading into the international break with a good feeling

After the 1-1 draw against Bayer Leverkusen on Saturday, SV Werder lie tenth in table with nine points after seven games. The Green-Whites were satisfied with both the performance against the Champions League participants as well as the course of the season thus far, following Saturday’s clash. “So far we have played well in most matches. Despite that, we have to continue developing week in and week out,” explained Ole Werner. Werder’s head coach would also like to utilize the upcoming international break: while some Werder players will be on their travels abroad, the friendly against Hannover 96 should provide the opportunity to gather some impressions and time on the pitch for others.

Marco Friedl shared his head coach’s assessment: “there are always areas in which we can get better. We try to take that with us as a team into the international break,” explained the captain. “A few of the boys are away. It might be useful for us to turn our concentration to something else with our respective national teams and then perform well when we return.” The defender is playing for the Austria national side in the UEFA Nations League this coming week. He is joined in the Austria squad by Romano Schmid, who is experiencing his first call-up to the senior side; Schmid is heading into the game with a good feeling: “I’m going to take the momentum from the league with me. I’m very happy to be there for the first time. I’m proud of the call-up and I’m looking forward to playing some good football together and training together,” reported the Austrian. 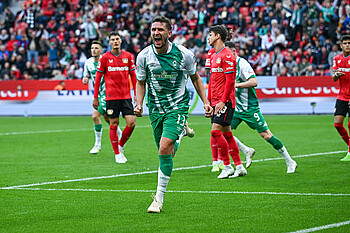 Milos Veljkovic was rewarded with a goal for his performance against Leverkusen (Photo: nordphoto).

The feeling is a similar one for Ilia Gruev, who has been named to the Bulgaria squad for the first time. “We’ve played well so far in the league and we’re satisfied heading into the break. Two international games await. I’m extremely excited to play for my country and to achieve something with the national team,” explained the 22-year-old. In contrary to the debutant, Milos Veljkovic has already collected some experience on the international stage, playing 20 times for Serbia. He would like to use this last international break before the FIFA World Cup this winter to show himself and to fulfil his dream of participating in a World Cup. “There are top international players within the national squads. You always have to be at your best. That’s why I’m looking forward to it and will give my all,” said Werder’s number 13. “It is an honour and a privilege to be play for my country. From a footballing perspective, I’m looking forward to the tournament. Of course, it’s a dream for everyone to be at the World Cup.”

For those Werder players remaining at home, there is the friendly against Hannover on Thursday 22.09.22. “Above all, it’s an opportunity for those players, who haven’t played a lot the last few weeks, to show what good players they are,” Werner explained as the reason for the friendly against the second division side. “In addition, it’s about us gaining certain information. But first and foremost, it’s that the boys can leave their footprint, even if it’s just a friendly.” The clash will take place behind closed doors but, thanks to our partners EWE, the match will be shown live on the official YouTube channel of SV Werder Bremen.