Match minutes and promotion for Veljkovic with Serbia

Werder’s national players in the Nations League – an overview

Back to Bremen with minutes under their belts – Werder players who travelled with their countries will be looking back on an international break of varying degrees of success. While Ilia Gruev and Romano Schmid made their debuts for their respective senior sides, Milos Veljkovic got some reasonable minutes too. However, Jiri Pavlenka and Marco Friedl went unused.

Centre-back Milos Veljkovic played the full 90 minutes as Serbia beat Norway in the UEFA Nations League. Veljkovic and his nation secured first placed in Group 4 of League B with the win, earning promotion to league A. Three days before, Serbia beat Sweden 4-1, but Veljkovic didn’t play as a precautionary measure surrounding a muscular problem. 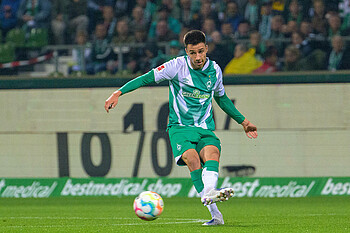 Ilia Gruev got lots of minutes under his belt during the international break (Photo: nordphoto).

Ilia Gruev also enjoyed a successful international break. It was the midfielder’s first ever senior call-up, and made his debut right away, playing 72 minutes as Bulgaria beat Gibraltar 5-1, before registering the full 90 as they went on to get an important 1-0 win against North Macedonia. Bulgaria finished second in Group 4 of League, only behind Georgia.

Romano Schmid was another Werder man to make his debut, having been subbed on for Austria as they were defeated 2-0 by France. The 22-year-old then made another brief appearance in a 3-1 defeat to Croatia. “Of course, that was something special. I hope to make further appearances down the line,” Schmid said after his return to Bremen on Wednesday. Werder skipper Marco Friedl was unused in both of Austria’s matches. Unfortunately for Schmid and Friedl, Austria were relegated from League A, finishing bottom on four points.

Jiri Pavlenka also went unused during the international break, firstly on the bench as the Czech Republic were defeated 4-0 by Portugal, and then also 2-1 by Switzerland on Tuesday, despite a change of goalkeeper at half-time. The Czech side were relegated from League A after finishing bottom of Group 2.