It was defeat for Werder in their friendly during the international break, falling 2-0 to Hannover 96 on Thursday afternoon. After a slow start, Werder grew into the game, creating plenty of chances, especially through Oliver Burke, but were not able to convert them for the lead. In the second half, the hosts seemed more focused and threatening, scoring twice through substitute Tresoldi to give the 96ers victory.

Line-up and formation: As Ole Werner had previously indicated, this game was to be an opportunity for some of the players who hadn’t had so many minutes so far this season.  With players missing on international duty, Werner looked to the U23s, with Tim-Justin Dietrich, Jascha Brandt and Min-Woo Kim all coming into the squad.

Struggling to break through 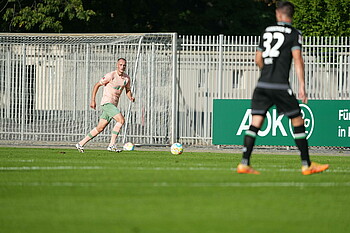 The first half highlights:

12‘: The first good chance for the hosts. Kerk plays a through ball behind the Werder defence and Dehm is able to get the finish away. His shot however goes past the far post and Zetti is not called into action.

16’: Oli Burke gets the ball in midfield and sets off towards the Hannover area. Pressured by Arrey-Mbi, Burke isn’t able to get a good finish away and 96 goalkeeper Weinkauf makes an easy save.

42’: Burke beats Arrey-Mbi at speed in the penalty area and shoots from a tight angle. Keeper Weinkauf just gets his leg out, diverting the ball for a corner.

44’: A corner from the left is met by Jens Stage, who heads goalwards, forcing another good save from the alert Weinkauf. Werder’s best chance so far! 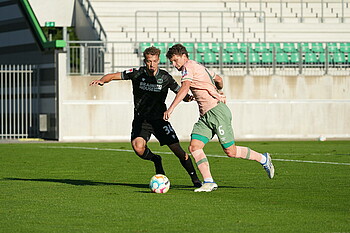 Jens Stage had the best chance for Werder (photo: Werder.DE).

54’: Goal for Hannover. Substitute Tresoldi gets onto Dehm's cross and puts the hosts in the lead.

64’: Burke sets up Stage, who strikes from 16 yards, but once again Weinkauf saves it with his legs. Another close one!

72’: Burke tries one from a little further out than he is known for, but his effort from 15 yards is saved by Weinkauf.

81’: Hannover double their advantage. Köhn breaks down the left, firing well which is saved by Zetterer. The rebound falls to Trisoldi, who is able to instinctively score via a deflection off the far post.

84’: The hosts look for another. Just moments after their second goal, Dehm puts it into the six-yard box, but the onrushing Köhn mistimes his run.

In summary: Hannover were ultimately the test of patience that Werder expected. SVW struggled to break down the home side's compact defence and were not sharp enough in front of goal to take the few chances they created. On the other hand, 96 used their few chances effectively, striking twice past Zetterer.