Claudio Pizarro’s press conference ahead of his testimonial match

‘Adios Claudio’ takes place on Saturday 24.09.22 at 17:30 CEST in the wohninvest WESERSTADION. It will mark Claudio Pizarro’s testimonial game. Numerous companions and friends are expected to be part of the fiesta that is ‘Piza’s last dance’, with Claudio playing for three teams on the day. The most important thing is to offer “a spectacle” for the fans in the sold-out stadium. “I would like to show the fans something amazing. They should simply enjoy the game,” explained Werder’s record goalscorer during the press conference ahead of the match.

It was a certainty for the Peruvian that his last appearance should take place in Bremen. “We have spoken about it for six or seven years and decided that my testimonial should be here,” expressed Pizarro as he also explained the reason for his wish: “Bremen opened the door to Europe for me and I’ve always wanted to come back here because I have always felt at home here. Therefore, it was important for me to have my final game over here.” 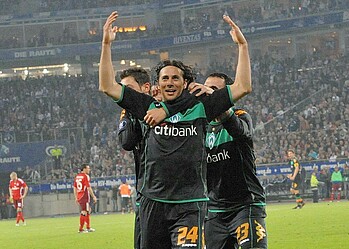 The year 2009 has a special place in the former striker’s memory, when he won the DFB-Pokal and reached the UEFA-Cup final with the Green-Whites. “Unfortunately, we couldn’t get over the line in the final in Istanbul, but that was an incredible year for us,” Pizarro said, looking back. “My first year here in Bremen was also special for me. Everything was completely different, the culture, the football.”

The striker made 250 Bundesliga appearances for SVW, almost exactly as many as for FC Bayern. With almost 200 goals, he was the top foreign goal scorer in the Bundesliga for some years. “I believe that was a really good period for me in the Bundesliga. In my whole career, actually. I am really satisfied with what I’ve achieved,” confessed the Peruvian.

Pizarro: “Football is my life” 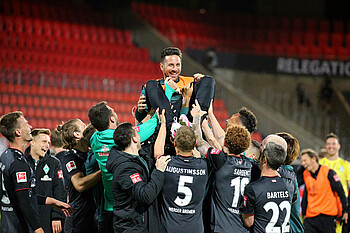 In his final game, Pizarro was hoisted up high by his teammates (Photo: nordphoto).

Piza’s career ended over two years ago in Bremen. At 41 years and 8 months of age, he called an end to his professional career. “I know full well that my body can’t take it anymore. I might be able to train with a 20-year-old totally fine and do what the coach says. But the youngsters can train again four hours later, whereas I need two whole days,” says the oldest Bundesliga scorer of all time with a smile on his face. “I’m enjoying playing with people my age or simply playing with friends. Football is my life. Now, I still enjoy professional football, but if I’m sitting on the sofa and watching it on the television or from the stands.”

Rather than sitting in the stands, however, on Saturday, the Werder legend will be on the pitch one last time with his ‘amigos’. “I’m actually really pleased that so many players, with whom I shared a pitch with during my career, will be there. It wasn’t easy. I’m looking forward to everyone being there and hope that everyone enjoys it,” concluded Pizarro.