Post-match reactions to the match in Freiburg

SV Werder Bremen came away from a closely contested match in Freiburg with a well-earned point on Saturday afternoon. Although head coach Florian Kohfeldt and his team went into the game looking for a win, at the end of the day everyone involved was glad to take a point back to Bremen following the clash at the Schwarzwald-Stadion. 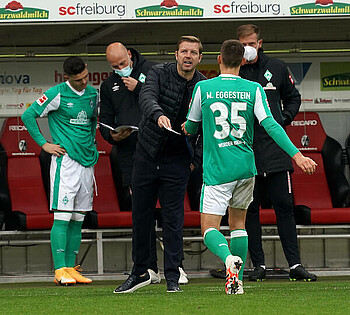 Florian Kohfeldt: “We played well in parts, but not when you look at the 90 minutes as a whole. It was a game that consisted of different phases. Freiburg started the game well and outplayed us at the start of the first half. We’d planned to switch up our tactics from the beginning because it’s clear that Freiburg are very flexible with their tactics. To force them to think on their feet, we planned to start with four men at the back and then change it to three after about 20 minutes. However, we had to make that switch earlier than planned because Freiburg started so well. That was why it wasn’t the end of the world that Freiburg took the lead, although it would have been much better if we hadn’t conceded then obviously. After we equalised though, we were much better right up to the interval. In the second half, Freiburg certainly created a lot more chances and they looked dangerous. Towards the end they really pushed us. The last 10 minutes often ends up being how you remember a match, but we played well in other phases of the game. I thought we were very good with the ball but out of possession, it was perhaps the worst I’ve seen us so far this season. But at the end of the day, we’ll gladly take the point back to Bremen with us.”

Niclas Füllkrug: “We set out to win of course, but a point away from home is fine after a game like that. Freiburg were clearly the better team at the start of the match, we weren’t awake individually or as a team. We were coming out second best in challenges and getting beaten to loose balls, and because of that we knew that Freiburg were feeling strong. We were also lacking a bit of concentration in certain situations.”

Ömer Toprak: “I have to admit, being sidelined with injuries recently has been very difficult for me. I was just glad to be back out there on the pitch, playing football. I always enjoy playing in Bundesliga stadiums. In terms of the match, I think that both teams had opportunities to take the lead. The Freiburg team played really well in the first 20 minutes and really put in a lot of effort - they deserved to be ahead. After half time, we had the chance to make it 2-1, but in the end a point is fine by me.”

On the start to the season:

Florian Kohfeldt: “We’ve started the season well and having seven points after four games is a good position to be in. The main aim now is to keep this form going!”
Niclas Füllkrug: “Our start to the campaign has been okay. After the first game against Hertha, people probably weren’t expecting us to carry on as we have done. We’ve picked up another point on the road and that’s a good feeling, but we can always give more.”

Ömer Toprak: “We’re in a development process. Last year was a difficult season for us all, but now we have a much younger squad and that will take a bit of time to click properly.”

First meeting with Dresden in 25 years

A reunion in rival colours

23.09.2021 / First Team
Your web browser ist outdated.
The web browser you are using is no longer supported.
Please download one of these free and up to date browsers.
Why should I use an up to date web browser?