Florian Kohfeldt on the intense preparation for Leipzig.

No time to waste, focus to be raised: the aim for Werder in their duel against RB Leipzig is clear. Preparation for this next game is more intense than usual, with the players making their way to the training ground early on Wednesday morning. “We weighed up the timing. It’s important that we can prepare for the Leipzig games without any interruptions. To that effect, we want to show that there’s no reason to wait for anything,” said Florian Kohfeldt in his press conference on Wednesday.

There are still a possible 39 points up for grabs over the remainder of this Bundesliga season. SVW will be hoping to add the first three of those points with a win against second-placed Leipzig on Saturday. The fact that Kohfeldt’s side is going up against a top team is obvious. However, a chance to get three points against a strong Leipzig side should be taken. “Leipzig and Dortmund are two great teams. But we also want to take something from these games. We have 13 games left; that’s 13 chances to win,” were the head coach’s words. 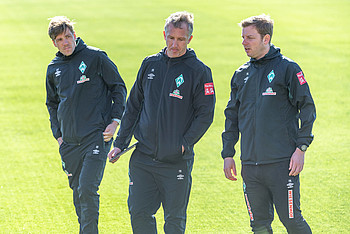 Alongside Frank Baumann, Clemens Fritz will help out in an advisory role (photo: nordphoto).

Setbacks can happen in games against Julian Nagelsmann’s side, but what’s more important is how you deal with these setbacks. “We’ll sit down and go over the various scenarios. We’ll have two types of discussion; the group meeting, and we’ll do one-to-one conversations, with Frank, my assistants and Clemens Fritz,” Kohfeldt explained. Werder’s head coach continued; “Clemens is experienced and knows situations like this. As an active player, he’s often had to live through periods like this one. He’s there to bring a different perspective to the group. He talks straight, I like that about him.”

Optimism is a virtue