Taking on the fight at hand

Marco Friedl on Düsseldorf and Hoffenheim

The team took on the fight they were faced with, and won. The 1-0 victory in Düsseldorf was a hard-fought win in the eyes of the entire team. “Not every win will be a nice one,” said Marco Friedl. “We know that it wasn’t one of our best games.” Nevertheless, the result counts, and Werder have picked up an important three points in a battle against a direct competitor. Almost more important, however, is that Werder never gave up and showed what it takes to get results in the fight against relegation. “We fought until the very last minute and gave it our all,” said Friedl, who left unsaid that it was an entirely different story at the end of the Hinrunde.

The Green-Whites lost three games in December against Paderborn, Mainz and Köln – three competitors in the bottom third of the table. “We cannot allow that to happen anymore,” said Friedl. The team spent long hours discussing these matches during training camp in Mallorca. “Everyone knows what’s at stake, even if it’s not nice, given the goals that we actually had in mind for this season,” he said. Friedl and Co. wanted those watching to see that the team had decided to react to the current situation – a reaction that the Austrian deems to be “positive.” 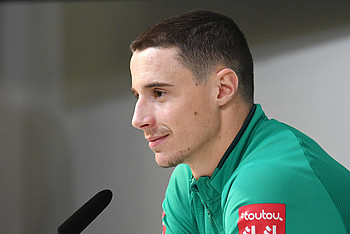 Werder won 56 per cent of challenges against Düsseldorf, while also having the lion’s share of possession, playing more passes and covering nearly five kilometres more than their opponents. Overall, it was a hard-fought but deserved win. Friedl and his teammates are now looking to take this slight momentum into their next match. But, the team will have new hurdles to overcome, with captain Niklas Moisander suspended and new signing Kevin Vogt a doubt. “We’ve been dealing with this the whole season,” said Friedl. “We’ve had to make several adjustments already to deal with injuries and suspensions.”

According to the 21-year-old, the defence has enough quality to cover from the two missing pieces in centre defence. “I’m not worried about it at all,” he said with an eye on Sunday’s upcoming home game (15:00 CET) against Hoffenheim. In terms of building confidence, it appears as though last weekend’s win against Fortuna Düsseldorf has already had an impact.

No fans at Hoffenheim match

16.10.2020 / preliminary report
Your web browser ist outdated.
The web browser you are using is no longer supported.
Please download one of these free and up to date browsers.
Why should I use an up to date web browser?