Reaction to the defeat at home to Union Berlin

The Werder players were clearly disappointed after the 2-1 defeat against 1. FC Union Berlin on Wednesday night. Although the performance was miles better than the one at the weekend, a number of individual errors cost the side again.

Head coach Ole Werner: "It’s no surprise that the team that made fewer mistakes won the game. To have lost again is really disappointing. We showed a reaction but we cannot afford to make these fatal mistakes. We have to simply get points on the board. Our performance wasn’t good enough tonight because Union were more focused than us and played with more clarity.”

Marco Friedl: “We’re obviously all disappointed. We wanted to finish the first half of the season on a better note than this. The performance was definitely better tonight. We were the better team in the first half and Union were only dangerous when we invited them onto us. Thankfully we’re back in action on Saturday. We know Wolfsburg are in great form right now, but we need points.” 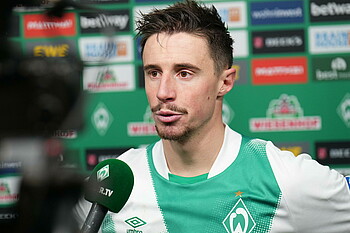 Leonardo Bittencourt: “We’re massively frustrated. We knew the game would be like this, Union are a very disciplined side. We went ahead and then let them back into the game with an individual error. The timing of their second goal was far from ideal. We could’ve taken something from the game, so it’s really disappointing. We know what we have to do. We haven’t got long until the next game – we know we can improve on tonight though.”

Amos Pieper: "It was a step up from the Köln game in a lot of aspects, but we shot ourselves in the foot for the goals, especially the first one. I was fully focused, and the goal gave me a boost – there are no excuses for the mistake I made after that for their first – we need to cut out these errors. Apart from that, we really let nothing through in the first half and defended superbly. We could and should have put the pressure on more in the second half after that. The first half of the season has been pretty good in general, even if things don't feel their best at the moment."