“I can’t wait for the season to start!”

Niklas Stark’s first few days of training with his new teammates are behind him, as he sits down for his first Werder press conference. “I decided to join Werder because right from the start, I felt like I would fit in to the philosophy here,” said the defender, who joined from Hertha BSC. As was the case with Amos Pieper, head coach Ole Werner convinced Stark to join the team after showing him a video which laid out how the centre-back could fit into his system.

“Ole didn’t send me the video, but rather showed it to me in person,” Stark said. “He clearly laid out his coaching philosophy and showed me how my strengths could be integrated into it. The entire process felt right, and I could already feel the trust they had in me, right from the start. That’s why I decided to join Werder.”

The next few weeks will determine in which position Stark could play in under Werner. The 27-year-old is able to play as a centre-back as well as a defensive midfielder. “You get to enjoy a bit more possession as a number six, and switch sides a bit. At the back, you can see the whole game unfold in front of you and can delegate a bit more. I enjoy both and can play at both positions. I will play wherever I can help the team out the most. I trust that the coach will put me where I’m needed,” he said.

“The stadium in Bremen is always rocking” 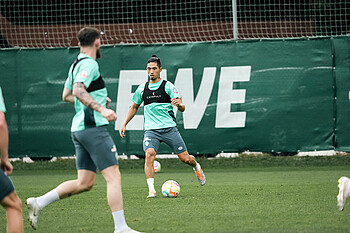 Stark will already know a few faces in the Bremen squad, having played with Niclas Füllkrug in Nürnberg and with Leo Bittencourt for the Germany U21s. Stark said that he received a warm welcome from the team, adding “We are trying to build a successful system here, something that I want to contribute to.” Werner was able to leave him with a positive impression during the contract negotiations, one that has been further confirmed during his first few days in Bremen. “We had some very positive talks. He has a clear plan, something that is very important in the Bundesliga. Ole showed me that he fully believes we will be able to follow this plan, even if it might not always be easy,” Stark said.

Stark is pleased to now be donning the green-and-white of SVW, saying “It was always tough to come and play at the wohninvest WESERSTADION. The stadium was always rocking; it was very loud but always a positive atmosphere. It’s tough to find that in the Bundesliga,” he said. “I’m happy to be able to experience it from the other side now.”