SV Werder Bremen have signed Jens Stage from FC Copenhagen ahead of the 2022/23 season, after agreeing a contract with the Denmark international. The 25-year-old will join up with the team immediately, and will head to training camp in Zell am Ziller with the Green-Whites on Thursday. Both sides have agreed to keep the details of the contract undisclosed.

“Jens has made over 100 competitive appearances for Copenhagen over the last three years, and has also picked up experience playing at the international level. His energy and aggressiveness will be of benefit to us in midfield. We’re pleased to have been able to convince him to move to Werder,” said Clemens Fritz, head of scouting and professional football at SVW. 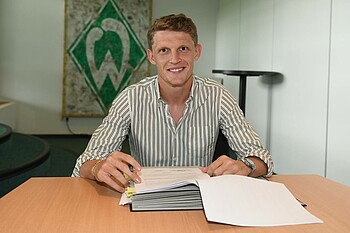 Head coach Ole Werner is also looking forward to Stage’s arrival. The Dane has so far won one cap for his country. “He has mainly played in central midfield or as a number eight. He’s physically strong, has a solid football background and can be a threat on goal as well. We’re convinced that he will be able to help us out immediately,” said Werner.

Jens Stage said: "I'm really excited to play in the Bundesliga. Werder Bremen are a well-known club in Denmark, not just because of how close Bremen is to the border. I knew I wanted to take this chance as soon as I heard about the interest. I can hardly wait to play at this stadium in front of the fans."

Stage made his professional debut for Aarhus in the top tier of Danish football in May 2016, before moving to Copenhagen in 2019. He made a combined 206 professional appearances for both clubs, scoring 32 goals in total.

All square in our Bundesliga opener

UNDERDOGS IN THE FIRST TOUGH TEST

05.08.2022 / First Team
Your web browser ist outdated.
The web browser you are using is no longer supported.
Please download one of these free and up to date browsers.
Why should I use an up to date web browser?