The pre-match report on the match against Hamburger SV

Werder fans have had to wait three and a half years, but the Nordderby against Hamburger SV returns on Saturday. The cities and their fans are getting hyped up for the match, and head coach Markus Anfang made it clear during his press conference that the match on Saturday evening (20:30 CEST kick-off) will be an emotional one. “We live for matches like these. It will be a firm but fair contest, that’s why we love this sport. I’m looking forward to being able to experience this game live.”

Squad news: Werder captain Ömer Toprak is still struggling with a cold as well as a muscular issue, and it is unconfirmed whether he will be able to feature in the Nordderby. Felix Agu and Leonardo Bittencourt will definitely miss out, whilst Eren Dinkci and Oscar Schönfelder have only been partly involved in team training. Mitchell Weiser is also struggling with a muscular issue, and Marvin Ducksch’s involvement in the game is still unconfirmed because he has suffered from a bout of illness recently.

Anfang: “It will be a tough challenge” 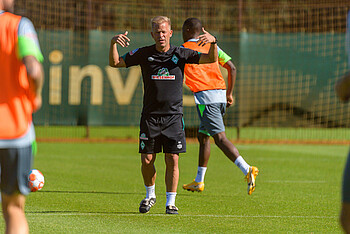 The head coach on the game: Markus Anfang wants to build on Werder’s three successive clean sheets. “It was important that won to nil again. We all want to work hard without the ball and continue keeping clean sheets,” commented the 47-year-old. “If we don’t concede, we can decide the game for ourselves with in attack” – above all against HSV, who are a very intense side. “They are a fluid team who make good plays and like to play one-twos. It will be a tough challenge for us:” The head coach is however sure that the team will be carried forward by the fans. “We need to transfer the fans’ positive energy onto the pitch and benefit from it,” concluded Anfang.

The last matchups: SV Werder Bremen and Hamburger SV have met each other 108 times in the Bundesliga, and this upcoming fixture is the first between the two in the 2. Bundesliga. The last competitive match took place on 24th February 2018, shortly before HSV were relegated. Due to their league positions at the time (Werder 15th, Hamburg 17th), it was more than just local bragging rights which were at stake. The winner came in the 86th minute: Philipp Bargfrede picked out substitute Aron Johansson who shot the ball between the legs of Mathenia. Rick van Drongelen and Ishak Belfodil lunged at the ball on the goal line and the HSV player eventually turned the ball into his own net and gave Werder a 1-0 victory.

Match facts ahead of the big derby 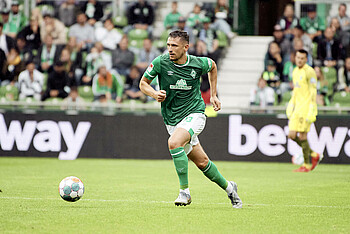 HSV on good form: A recent win against SV Sandhausen (2-1) and two draws against 1. FC Heidenheim (0-0) and SV Darmstadt 98 (2-2) means HSV are now three games unbeaten in the 2. Bundesliga, which is almost as good a run as they managed in March and April of this year when they went four without defeat.

Strong record overall: Werder are unbeaten in four competitive fixtures against HSV. With two wins and two draws Werder are on their longest unbeaten run against Saturday’s opponents since they went eight matches without a Nordderby defeat between 2003 and 2006. Another fact?  Gladly. SVW have won seven of their last eight Nordderby matches on home turf. And another: Since the Bundesliga was founded, Werder have only picked up more wins against FC Schalke 04 (47) than against Hamburg (45).

“Too many underwhelming performances”

Motivation faces off against self-confidence

15.10.2021 / First Team
Your web browser ist outdated.
The web browser you are using is no longer supported.
Please download one of these free and up to date browsers.
Why should I use an up to date web browser?