Chances not put away!

SVW lose 2-0 to HSV in the Nordderby

Werder certainly had their chances! If you watched the game or read this match report, you’ll know that SVW just could not find the back of the net today. SVW lost 2-0 to HSV in the 109th Nordderby. Glatzel put the visitors ahead in the 2nd minute before Christian Groß saw red, Marvin Ducksch had a free-kick goal disallowed and Heyer doubled HSV’s lead in first-half injury time. In the second half, Hamburg captain Sebastian Schonlau was also ordered to leave the field after picking up two yellow cards, and Werder had a plethora of opportunities to get back in the game, but did not take any of them, culminating in a derby day defeat.

Line-up and team news: Lars Lukas Mai came into the starting XI for the injured Ömer Toprak, but that was the only change from the last game. Winger Eren Dinkci made his return to the squad, named on the bench following his muscle injury as Markus Anfang set his side up for the Nordderby in a 4-3-3 system. 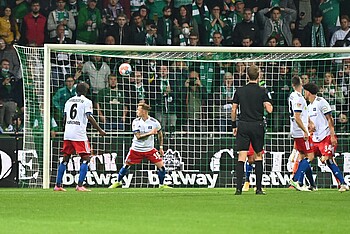 The moment Werder thought they were level! (photo:nordphoto)

2’: HSV take the lead straightaway! Leibold plays a long pass that Heyer latches on to before crossing into the box, and Glatzel is unmarked and free to head home from close range. Not the start we‘d imagined!

13’: A fantastic atmosphere! The fans continue to support SVW despite or perhaps due to the early goal. Electric!

30’: Schmidt’s has a shot on goal from a free-kick, but his effort is blocked by the wall and nothing comes from the resulting corner.

31’: Red card! Christian Groß receives his second yellow card and has to leave the pitch. Groß made a lunging challenge to try and close down Heuer Fernándes but clatters into him, leaving the referee no choice but to send the midfielder for an early bath.

37’: Ducksch tussles with Schonlau in front of the HSV goal before Ducksch goes down claiming a foul, but the referee decides that no foul had been committed, and this decision is confirmed correct by a VAR check.

42’: 1-1! But no goal! A brilliant free-kick from Ducksch just outside the box nestles into the top left corner, cueing rapturous celebrations from the stands, but the goal is ruled out because Weiser illegally interfered with the HSV wall. Correct decision, but a tough one to take!

45+1’: Moritz Heyer sadly makes it 2-0 to HSV when he meets a Jatta cross at the far post and heads the ball in from close range, shooting in the opposite direction to which Zetterer is scrambling to get across.

45+4’: Half-time! The last quarter of an hour was a series of incredible events. Werder need to step it up in the Nordderby, there’s still something in it for us!

The ball just wouldn’t go in... 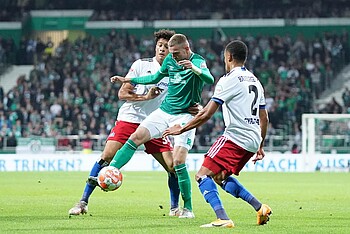 A good fight and a lot of chances but no goal for SVW (photo: nordphoto).

52’: Another red card is awarded, this time for Sebastian Schonlau as he picks up a second yellow card. Schmid took on Schonlau and the HSV captain was forced to bring him down, which means it will be ten against ten for the rest of the game. Forwards SVW!

61’: Jatta has a one-on-one opportunity against Zetterer, but the goalkeeper saves the Hamburg player’s effort by sticking a leg out. A potentially significant and incredible save!

74’: How have we not equalised there? Füllkrug breaks through the HSV defence on the right-hand side and dribbles past the onrushing Heuer Fernándes, but he is unable to squeeze the ball into the corner of the empty net and he finds the side netting. Perhaps a pass into the middle would have been the better option. What a match!

77’: Werder are getting more and more chances! Another big opportunity for SVW goes begging! Leibold miscontrols the ball in front of his own goal and the ball lands at Füllkrug’s feet, who then has a free shot on goal, but his effort is struck too centrally and Heuer Fernándes can save it.

81’: Schmid dribbles through the box from the left-hand side and shoots from ten yards, but Heuer Fernándes makes himself big and gets down quickly to save Schmid’s effort.

90+5’: This just hasn’t been our day. Now Veljkovic shoots over the bar from twelve yards after being played in by a flat pass.

Summary: It was an emotional, hard-fought and eventful Nordderby which ultimately ended in a 2-0 defeat, but SVW can have no complaints about the result. A poor start was followed by a hectic first-half including a red card, a disallowed equaliser and then a second goal for the opposition just before the end of the half. The second half was much better, but our efforts couldn’t affect the scoreline as many chances went begging. The team put a great effort in but come away with nothing to show for it. It’s a tough result to take, but the team can certainly take their fight and spirit into the next matches, starting in Dresden next Saturday!