After a balanced opening 80 minutes which lacked in clear-cut opportunities, two late goals saw SV Werder Bremen drew 1-1 with FC Schalke 04. Werder began to dominate the game and have most of the chances, and then against the run of play Schalke forward Simon Terodde headed S04 into the lead, scoring what looked like the winning goal. The climactic end to the game continued as Werder were awarded a penalty in the ninth minute of stoppage time which Niclas Füllkrug coolly converted.

Line-up and team news: Interim coach Danijel Zenkovic made four changes to the team which started against Nürnberg. Skipper Ömer Toprak, Christian Groß, Leonardo Bittencourt and Felix Agu came back into the starting XI in place of Marco Friedl, Milos Veljkovic, Nicolai Rapp and Mitchell Weiser, as the right-back dropped to the bench. Due to the multiple absences in defence, Werder U19 young star Fabio Chiarodia was named in the squad for the first time in the Bundesliga 2.

Not much to write home about to begin with

An intense, hard-fought game made up for a lack of goals in the first half (photo: nordphoto).

8’: Marius Bülter charges towards Jiri Pavlenka’s goal, but Ömer Toprak catches up to him and times his slide tackle to perfection as the ball rolls out for a corner.

12’: Simon Terodde sees the Werder keeper off his line and tries to chip it over him from just outside the right-hand side of the box. Fortunately his effort is off target, but it is a warning for SVW.

21’: Ducksch sends it into the box from a free-kick, and the ball eventually falls to Christian Groß. He shifts it onto his right foot but then shoots high and wide.

33’: Romano Schmid chips the ball into Marvin Ducksch’s path, who then tries to square it from the left-hand side of the penalty box, but the cross is lacking in power. Niclas Füllkrug tries to turn it home, but Victor Pálsson is there to clear off the line!

Late goal in a dramatic end to the game 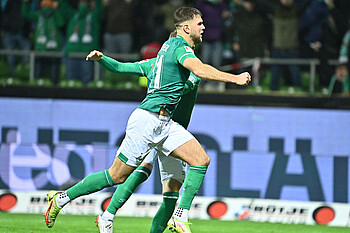 48’: Simon Terodde is on the end of a Schalke cross and flicks the ball on at the near post, and fortunately it goes wide. The Royal Blues’ resulting corner does not threaten the Werder goal.

53’: Simon Terodde picks out his teammate Marius Bülter who then plays it back to his strike partner in the middle. Thankfully, Toprak is there to block the effort!

56’: Felix Agu crosses into the box, and Leonardo Bittencourt leaves it for Marvin Ducksch. Werder’s no. 7 doesn’t get the best contact on the ball and doesn’t get enough power behind the shot, so Fraisl has no problem with stopping the effort.

59’: Romano Schmid drives down the left wing towards and then down the by-line before crossing in to Niclas Füllkrug who tries a volley which goes over the bar!

60’: Schmid has another go for SVW from the left corner of the box after working it well past three S04 opponents. His shot goes past the far post, however.

63’: Manuel Mbom clips it into the box towards Marvin Ducksch, who heads just wide. The Green-Whites have really probed the opposition goal in the last few minutes.

79’: Thomas Ouwejan crosses into Werder’s box from a free-kick, and Malick Thiaw rises highest to head the ball towards SVW’s goal, but it goes just wide of the left post.

82’: Simon Terodde opens the scoring for Schalke 04. Rodrigo Zalazar has a pop from long range, which Pavlas is only able to parry. It falls to Simon Terodde on the rebound, and he heads the ball into the back of the net.

90+4: Gruev lobs the ball into the box, and Ducksch flicks it on into Assalé’s path. He is unable to get a shot away because he is fouled in the process. VAR checks the incident and awards a penalty to Werder.

90+9: YESSSS!!! Niclas Füllkrug slots the penalty away to equalise!

Summary: Unbelievable! The first half was closely contested with neither team taking any real risk, and most of the play took place in the central third of the pitch. There weren’t too many clear chances in the second half, but the game was much more intense and many more fouls were committed. The Green-Whites were in the middle of a good phase of the game for them but were lacking the final ball or the finish. S04 took the lead late on through Simon Terodde, and although it seemed the game had slipped away from SVW, the Green-Whites were awarded a late penalty after Roger Assalé was fouled, and Niclas Füllkrug stepped up to earn Werder a deserved draw!

Schmidt and Chiarodia in isolation

Ole Werner to be the new head coach of Werder Br ...

28.11.2021 / First Team
Your web browser ist outdated.
The web browser you are using is no longer supported.
Please download one of these free and up to date browsers.
Why should I use an up to date web browser?