“Shot ourselves in the foot”, but a courageous response

The Nordderby ended in defeat as SV Werder Bremen lost 2-0 to Hamburger SV. After going behind early on and seeing an equaliser disallowed, the team “reacted well and should have turned the game around,” summarised head coach Markus Anfang. Werder were unable to find the back of the net in a game marked by two red cards. “We wanted to leave it all on the pitch, and we did that in the second half, but unfortunately we weren’t rewarded for it,” added Marvin Ducksch after the Nordderby defeat. 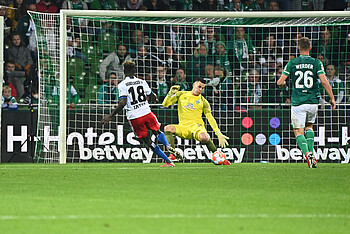 Marvin Ducksch: “We didn’t start the game well and went behind early on. The crowd supported us brilliantly and we wanted to give something back, but then came the red card. We all put an arm around each other at half-time, looked at each other and said: “One goal and we’re right back in this.” We played pretty well in the second half. We wanted to leave it all out on the pitch, and we did that in the second half, but we weren’t rewarded for it. Sometimes in a game, the ball just doesn’t want to go in. I think we did enough to deserve a goal in the second half, and if we had found the net, I think the reaction from the crowd would have seen us through to more.”

Michael Zetterer: “We conceded early on and then got an unnecessary red card, before we conceded again during first-half injury time- everything went against us today. It’s a tough defeat to take, because we really wanted to win, for the fans, the city, the club, and for us as a team.”

Markus Anfang: “We were not aggressive at all in the first 25 minutes, even though we wanted to be and have done that well in the last few weeks. It was an easy game for HSV, we went behind right at the start and then a short while after we went a man down. You saw how tough it was for the younger lads to get right into the game from the off. But I think we reacted well and probably should have turned it around, in my opinion. Once it was ten against ten, we were the better team and we created five or six big chances, and we can’t have any complaints about that. We didn’t take them and ultimately, we lost the game. But the lads performed well in the second half, we never gave up and we tried hard to find a goal, but we simply couldn’t find one. When you’ve already been booked, you have to go about your challenges in a different way. Grosso shouldn’t have done what he did, but he knows that.”

Mitchell Weiser: “You could tell we were nervous and we made simple errors in the first moments, but then we got better. We shot ourselves in the foot with the free-kick infringement and the red card. In the second half we kept performing and managed to create some chances but it wasn’t enough come the end of the game.”

On the penalty shout: 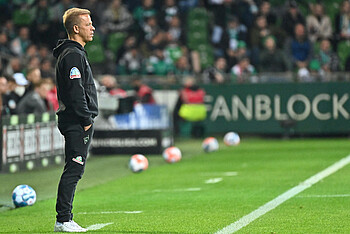 Markus Anfang “We should have turned the game around” (photo: nordphoto).

Marvin Ducksch: “It’s clearly a penalty. I’ve won the ball and got my body in front of his and then he grabs my arm and catches me with his foot. The ref saw all that happen and I don’t know how it can be anything but a penalty.”

Markus Anfang: “We weren’t awarded the penalty after Marvin collided with the defender, but I think we can all see that it was a penalty.” 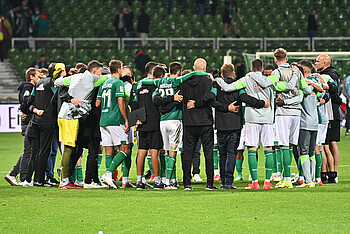 The team after the defeat (photo: nordphoto).

Marvin Ducksch: “There are a lot of positives to take from this game. You can see we’ve got potential and that every player can improve. Even when we were a man down, everyone put the hard yards in and left it all on the pitch. Unfortunately nobody could find the net today, and some days it’s like that, but we want to change that next week.”

Markus Anfang: “The team never gave up, we always played on the front foot and didn’t lose hope. I think we performed well when we went down to ten as well as in the second half. We need to build on that and do better.”

Mitchell Weiser: “I think we can build on our second-half performance. Even when we were a man down, we stayed calm. You could see we were pushing hard for a way back into the game, we were overall the better side and we need to concentrate next week so that we can play to the best of our ability.”