Reaction to the 4-3 win in Paderborn

SV Werder’s away match against SC Paderborn is certainly one for the history books. It was a rollercoaster of a match which ended 4-3 to the Green-Whites. Head coach Ole Werner viewed it as a “crazy” game, whilst Marvin Ducksch could only summarise the game as “great”.

Ole Werner: “It was a crazy game today. We don’t need to spend too much time talking about precise technical aspects today. What was important for us today was that we came back from being 3-1 down. It was a hard-fought game against a strong Paderborn side, and the game proves the great fighting spirit of the players and how they stuck to the plan we discussed before the game. That’s how we were able to turn this around today.”

Ömer Toprak: “We’re really thrilled. It was a mad game, and alongside the wonderful goals scored, it was also a real fight, and we always kept going. I was somehow able to get the ball over the line for the winning goal, and I find it strange that I scored a goal like that after seeing so many unbelievable strikes during the match.”

Marvin Ducksch: “It was a great game for all involved. It went back and forth, and we weren’t expecting that, not in this way, at least. There was something for everyone.”

Anthony Jung: “I’d never experienced such an extreme game like this. We kept going throughout even when the game was stopped for long periods. We tried to keep our heads and did that well until the very end. You could also say that we deserved the three points come full time.”

On the team’s fighting spirit: 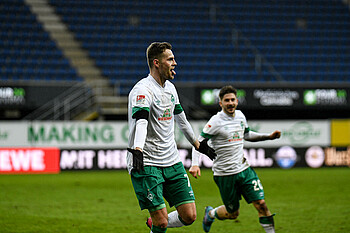 Marvin Ducksch: “This game shows the progress we’ve made. The goal weren’t lucky at all, they were actually very well worked. That shows just what a clear plan the coach has given us. It’s also evident that we’ve got good spirit. It doesn’t matter if we’re in a game or in training. The way the bench rose to their feet on many occasions during the game says it all. We need to keep this feeling with us.”

Jiri Pavlenka: “We showed great character and never gave up. I’m proud of the team. Our goal is to stick together like we’re doing now and to keep believing in ourselves. We’ve seen what’s possible when we do that.”

Anthony Jung: “The goal for 3-1 was a stroke of genius. It wasn’t easy when Paderborn scored their third after we had played well just before that. But we didn’t give it a second thought and continued to attack. We all knew we were able to turn the game around.”

On the VAR decisions:

Ole Werner: “It was a real test of my nerves and it brought added drama to an already exciting game. All the decisions that were eventually made could have gone the other way, so it was good that they were checked, even if that means celebrations come a little late or, on the other hand, are cut short.”