“Everyone needs to be up for the challenge”

Clemens Fritz in the mixed zone ahead of the season finale

It all comes down to this. Werder’s season comes to a close against Jahn Regensburg at the wohninvest Weserstadion on Sunday (15:30 CEST) and Ole Werner’s side have the chance to seal their promotion back to the Bundesliga. Clemens Fritz, however, has warned the players that there is no room for complacency: “We want to win this game just like we want to win any other. We know full well that we are up against a very tough opponent who may be able to play with a bit of freedom,” said Fritz ahead of the game.

The 41-year-old made it clear that Werder will not go into the game looking to play for a draw. “I have no idea how we would even go about doing that,” explained Fritz, who was also quick to point out that his side are facing a tough test on Sunday: “We found it difficult against them in the first half of the season. They are a very physical team who play with a lot of intensity. You have to bring everything to the pitch in order to compete with them.” Fritz also laid out what is required in the build-up to the game: “You have to train well and with lots of intensity. Everyone needs to be up for the challenge. It is important to get a good feeling in the camp through good training sessions. It is also important to go into the game with a winning mentality. I am absolutely convinced that our team are up to the test and are looking forward to this challenging week.”

“It is important that we keep it together” 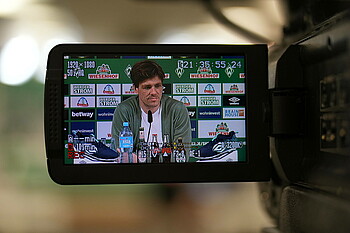 The key to a big game is in the preparation, according to Fritz (photo: WERDER.DE).

Fritz knows from his own experience what lies in store on Sunday. He has experienced many decisive games on the last day of the season, the most important of which was against Frankfurt in 2016, when Werder knew that a win would keep them in the Bundesliga. He is also aware of how important it is to prepare well for matches like these: “You have to hold it together and stick to the task,” he emphasised. At the same time, however, each player has different needs in the build up to a big game: “Each player deals with it differently. Some, for example, need a distraction. I was always concentrated on the task. I maybe read the newspaper a little bit but I didn’t need too much of a distraction. Everyone needs to find what works for them when preparing for such a big match,” he said.

Fritz also believes that Werder have a “good mix of experience and youth” within their ranks, which will stand them in good stead for the weekend. He also believes that it is important for the players to go into the game with the right mentality: “You have to go into the game with a relaxed attitude and with a clear head. You have to have self-confidence, not get distracted by things outside your control and believe in your ability,” explained Werder’s former number 8. He continued: “We will also need to have a certain level of intensity and aggression in order for us to show our quality on the pitch.”

There have been hardly any changes to the squad since the last game and almost everyone is available for selection. Only Ömer Toprak, who went off injured against Aue, is in doubt and a decision about him will be made in the next few days. “He felt something in his calf again. We took him off as a precaution so he didn’t do further damage. His injury is being treated and he will train individually over the next few days. We will try and step up the intensity this week and see how he manages,” said Fritz.