Mitchell Weiser on his goal, the game against HSV and his fitness levels

Mitchell Weiser got off to the perfect start as a Werder player, scoring on debut against Ingolstadt. Now, the 27-year-old is about to face his next challenge: his home debut on derby day. After three and a half years, the next Nordderby against Hamburger SV will take place on Saturday (20:30 CEST). “It will be wild,” suspected Weiser after the full-time whistle in Ingolstadt (click here to read the match reaction). “The fans will be more fired up,” added Weiser during a press conference on Wednesday: “These matches are so much more emotional for the supporters."

Weiser’s first display of passion came after he found the net against FCI- even if it was only a quick outburst. “It’s great that we won and that I got on the scoresheet. It was so much fun to be back playing again.” But the 27-year-old doesn’t want to single out any particular player. “It’s a cool story that Marvin and I have both opened our accounts for Werder so soon, but the rest of the team also played very well. Maybe they’ll score the goals next time,” said Weiser, who has settled into the team very well.

Weiser: “Of course we want to pick up three points” 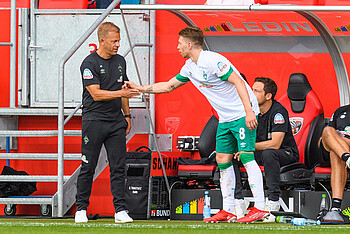 As a former Köln player, Weiser is used to big derbies such as those against Leverkusen or Mönchengladbach. The Nordderby will be Weiser’s first game at the wohninvest WESERSTADION, and that makes it all the more exciting: “It’s my first match at home, so I’m obviously looking forward to it, but the fact that it’s this game makes it even more special. It will be a great game.”

Not just our latest signing but also the entire squad is going into the game with confidence. “Our last two games have been very good, and we want to build on that. Of course we want to pick up three points,” added Weiser, who gave a good account of himself against FCI on debut. Even though he was unable to complete the entire 90 minutes, Weiser is certain that this will quickly change: “I felt a bit stiff afterwards, but I’ve recovered well and am training hard. My fitness will build up, game by game. The first game did me some good, and it’s normal to be a little sore after a match,” explained the 27-year-old.

14.09.2021 / First Team
Your web browser ist outdated.
The web browser you are using is no longer supported.
Please download one of these free and up to date browsers.
Why should I use an up to date web browser?