3-0 victory sees Werder climb back up to second place

Match report on the away victory in Aue

After a sluggish start, SV Werder Bremen secured a 3-0 victory over Erzgebirge Aue. The game began with an early wake-up call for the Green-Whites as Aue's Baumgart turned the ball into Pavlenka’s net in the first minute of the game – fortunately for the Green-Whites, Nazarov was offside in the build-up which saw the goal disallowed. Werder then grew more into the game, but were unable to create any clear-cut chances during the first half. Marco Friedl then made it 1-0 to the away side shortly after the break (49’) and paved the way for the away win. Two stoppage-time goals from Niclas Füllkrug (90+2’) and Niklas Schmidt (90+6’) put a seal on things for Werder. Whilst it wasn’t the prettiest, it was an important away victory in the race for promotion, and the three points won in Aue take Werder back to second in the table, meaning they are in control of their own destiny at home to Regensburg next week.

Line-up and team news: Werder’s experienced defensive players Ömer Toprak, Milos Veljkovic and Christian Groß made a timely return to the squad as Ole Werner selected the trio in the starting XI. Ilia Gruev, Nicolai Rapp and Felix Agu were named on the bench. 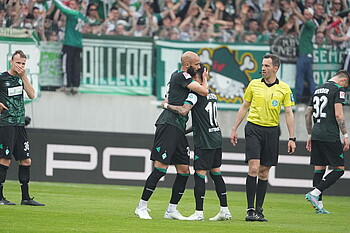 Ömer Toprak had to come off in the first half due to injury (photo: W.DE).

1’: Uh oh, the ball is in the back of Werder’s net just seconds into the game. Prince Osei Owusu plays it into the penalty box and Tom Baumgart pokes the ball past Pavlenka. However, Nazarov was in an offside position and was involved in the build-up, meaning the goal has been disallowed. Werder get a lucky break!

7’: First opportunity for Ducksch! Marco Friedl plays it over the top for Marvin Ducksch to chase. The striker gets on the end of it and tries to chip it over Klewin, but he doesn’t get proper contact on the ball and it goes high and wide.

24’: Niclas Füllkrug pops up on the right side of Aue’s box and Marvin Ducksch is waiting for a tap-in on the other side. Füllkrug squares it across, but the ball is too far in front of Ducksch and it runs away. He would have had a clear chance on Klewin’s goal.

35’: Ömer Toprak’s match ends early after picking up an injury during a challenge with Prince Osei Osuwu, and our captain comes off for Nicolai Rapp. Get well soon, Ömer!

38’: Huge chance for Schmid! Marvin Ducksch picks out the Austrian with a sensational pass, leaving him free to shoot on Klewin’s goal, and he sends a toe-poked effort towards goal. However, the keeper saves the shot and it goes out for a corner. Werder’s best chance so far!

41’: Aue launch a counter-attack and Dimitrij Nazarov has a go from long range. His powerful shot brings a strong save out of Pavlenka, who gets across to tip it round the post for a corner, from which nothing comes for the home side.

One early and two late second-half goals for Werder 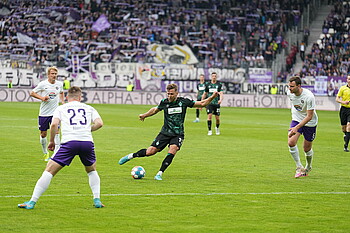 49’: GOAL! Marco Friedl makes it 1-0 to SV Werder Bremen! Following a corner-kick, Leonardo plays a clever one-two with Mitchell Weiser which sees our number 10 into some space in Aue’s box. He sends a sharp, flat cross into the danger area, and Marco Friedl is on hand to divert the ball into the back of the net under Klewin’s legs. YESSS! Keep going, Werder!

67’: Marco Friedl tries his luck from long-range, and his left-footed effort flies just wide of the right post. Good try!

72’: Mitchell Weiser dribbles strongly and reaches Aue’s penalty box. The wing-back then squares it to Niclas Füllkrug who has a shot on goal. It takes a deflection and goes just wide of the left post, and Bittencourt’s resulting corner also doesn’t bring anything.

80’: Dirk Carlson is stretchered off, but he holds a thumb up to say thank you to the fans who applaud him off the field. We would also like to wish Dirk Carlson all the best with his recovery!

87’: Aue turn up the pressure! Substitute Jan Hochscheidt makes a brave run in behind and finds some space on the left-hand side of Werder’s penalty box. Pavlenka comes out to close him down and Hochscheidt tries to squeeze it in at the near post, but Pavlas gets a touch to it to make sure it goes out for a corner, and the Werder defence manage to clear the resulting set-piece.

90+2’: GOAL! Niclas Füllkrug makes it 2-0 to SV Werder Bremen! YEEEES! Lücke receives the ball from substitute Niklas Schmidt and readies himself for a shot before firing at goal. His effort takes a slight deflection and sails into the far corner. What an important goal!

90+6’: GOAL! Niklas Schmidt makes it 3-0 to SV Werder Bremen! That’ll do it! Substitute Eren Dinkci does well down the left-hand side before picking out Niclas Füllkrug, who does well to turn in a tight space and lay it off for Niklas Schmidt, who has no problems tapping it home for Werder’s third. Well played!

Summary: SV Werder found it tough in the first half, but they started to get in to their groove early on into the second half as Marco Friedl made the breakthrough (49’). Two goals in stoppage time from Niclas Füllkrug (90+2’) and Niklas Schmidt (90+6’) put the game to bed and put Werder back into the race for promotion. It wasn’t pretty, but it was an important away win and it sees Werder reclaim second place in the table!