Markus Anfang on pre-season getting underway

SV Werder Bremen began their pre-season preparations on Saturday ahead of the 2021/22 season. During a press conference after the team’s first two training sessions, head coach Markus Anfang offered a positive outlook on the upcoming weeks. “I see this as a massive opportunity,” he said. “Time will be a key factor in our rebuild and continued development.”

WERDER.DE have summed up the most important moments from today’s press conference with Markus Anfang. 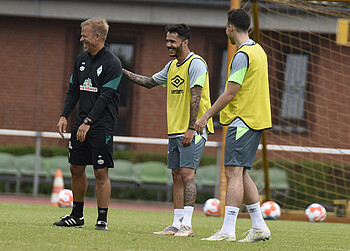 ...his first impression: “So far, I have a good feeling and my first meeting with the team was very positive. Everyone has proven to be very willing to participate so far and the training sessions went well. The players are having fun and are giving it everything. The mood is good.”

...squad planning: “It’s difficult to talk about the squad at the moment, and it’s not easy to make any sudden decisions. We will need to be patient for now, and we are in constant contact with Clemens Fritz and Frank Baumann. We’re not finished with our squad planning yet. It’s important that the new players have contact with the team. But, for the moment, we’re working with the players that are here already, are making contacts and are forming a connection to each other.”

...the first training sessions: “The first training sessions featured lots of drills. The players needed to refamiliarise themselves with playing and being back on the pitch. Today, we focused on tactics. Right now, it’s about gaining experience as a team and getting feedback from the players. We’re trying to cover a lot of ground and run hard with an 11 vs. 11. The first few sessions are important in order to build a foundation. Through our discussions with the team, we will be able to fine tune what we need to work on.”

...Anthony Jung: “He’s a very flexible player and can feature both at centre-back and on the wings. He has won several titles already and it’s important that he brings new energy and impetus into the side. His age and experience allow him to fit in well with our backline and also to help develop it. He has the chance to prove himself, which is what we’re expecting from him.”

...setting goals: “We’re focused on building ourselves back up. In the end, we will need to get results in order to be able to tackle our goal of an immediate return. Of course we’re hoping to be successful as quickly as possible, but we first need to rebuild. With our new coaching staff and a restructured squad, we’re hoping to be as successful as possible. We need to bring a certain level of stability to the club and the team, in order to be well situated in order to compete in the second division.”

...the younger players: “The opportunity for young players to showcase themselves is extremely high right now. Through our pre-season friendlies and training sessions they could break into our matchday squad or even the first-team squad. Our academy does good work, and we should take advantage of that.”

Squad update ahead of the DFB-Pokal game in Osna ...

03.08.2021 / First Team
Your web browser ist outdated.
The web browser you are using is no longer supported.
Please download one of these free and up to date browsers.
Why should I use an up to date web browser?